I used the DROID MAXX for more than a year. It is, hands-down, one of my favorite Android devices. If you're looking for a good deal on a fantastic phone that's a little past its prime, you can't do better than Woot.com's current Electronics section promotion. The Amazon subsidiary is offering the Motorola DROID MAXX in refurbished form for $179.99, a little less than $500 off of the original retail price. 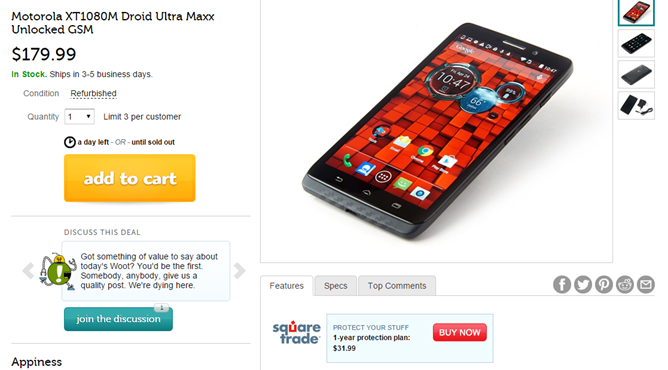 The description says that this is a "Droid Ultra Maxx," but based on the battery spec it's the higher-end DROID MAXX, not the DROID Ultra.

If it's been a while since you've looked at Motorola's 2013 line, then think of the DROID MAXX as a spruced-up version of the original Moto X. It uses the same dual-core "X8" processor (actually a modified Snapdragon S4 Pro), the same 2GB of RAM, and the same almost stock Android software with Motorola motion and voice add-ons. The differences are mostly physical. While the DROID MAXX uses a larger 5" AMOLED screen, it's still relatively humble at 720p resolution. It also has a beefier Kevlar body with physical navigation buttons, and it comes with 32GB of storage by default. The rear camera is 10 megapixels, and admittedly well below the quality of competing phones like the Galaxy S4. Like all members of the MAXX family it has a sizeable battery: this one's rated at 3500mAh, which tended to last me at least two days even on LTE.

Speaking of LTE: this is a Verizon phone. You can slide a Verizon nano-SIM into the slot and be ready to go with both 3G and LTE service. Verizon's LTE phones are unlocked, meaning that they work on GSM networks around the world (including AT&T and T-Mobile), but Verizon's unique LTE bands don't operate with any other carriers. If you're OK with 3G speeds and fantastic battery life, this is a great phone at a great price.

At the time of writing the DROID MAXX and the very similar DROID Ultra and DROID Mini from the same model year run Android 4.4.4. An update to Android 5.0 has been promised, but not yet delivered. Verizon phones come with locked bootloaders, but you may be able to unlock it depending on what software is loaded on these refurbished phones; check this XDA forum (which covers the MAXX, Ultra, and Mini) for more information.

Woot's supply is likely to go fast. The company sells to the United States with a flat $5 shipping charge, and these refurbished units come with the usual 90-day warranty.

[Weekend Discussion] With Smartphones Getting So Big, Do You Still Want A Tablet?

[Update: Set A Reminder As Well] Google's Desktop Search Also Lets You Set An Alarm Or Send A ...