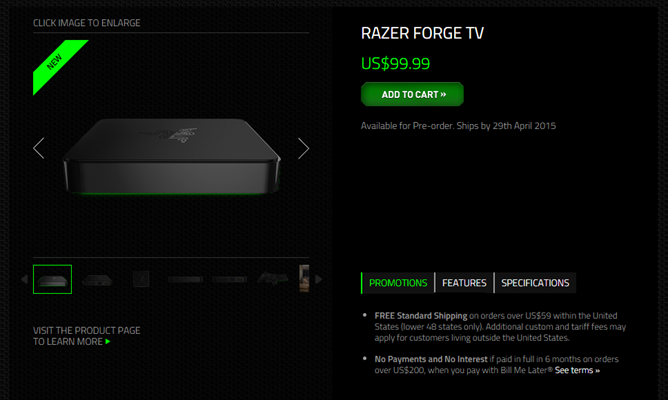 The Forge TV is a standard Android TV device with a Snapdragon 805 system-on-a-chip, 2GB of RAM, 16GB of storage, and support for USB 3.0 hardware and gigabit Ethernet on top of the usual Wi-Fi and Bluetooth. It gets that Ethernet port because Razer is pushing its Cortex streaming software (sold separately), which allows for NVIDIA SHIELD-style remote PC gaming without any of Big Green's hardware restrictions. Other than Cortex support and a few Razer-specific UI tweaks, the Forge TV runs the same Android TV software you'll find on the Nexus Player. 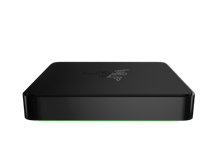 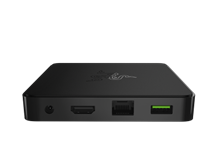 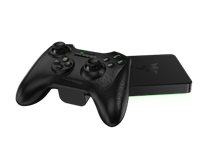 The stand-alone Forge TV will cost you $99.99 (the same price as the Nexus Player with more powerful hardware), but it doesn't include a remote of any kind, so you'll probably have to use the Android TV app. The bundle with the Serval controller is $149.99, which is ten dollars more than the Nexus Player plus the official ASUS controller. Both options include free standard shipping. Separate Serval controllers can be bought for a hefty $80 each, and for the moment there's no listing for the Turret combined mouse and keyboard, which was priced at $129.99 when the Forge was announced. USB and Bluetooth controllers, mice, and keyboards should be compatible with the Forge if you'd like to save some money.

By contrast, the upcoming NVIDIA SHIELD Android TV box (the only other one set to release, so far as we know) will cost $200 with a controller. It also includes NVIDIA's Gamestream capability for free, and the Tegra X1-based hardware is considerably more powerful than the Qualcomm chipset in the Forge. The SHIELD is scheduled to launch sometime in May. If nothing else, it's nice to have a few different options for Android TV at last.