Today marks OnePlus One's one year anniversary — so it's one plus years old now? — and the company is officially celebrating with a 50% reduction on select accessories and a new update for its users. Lollipop 5.0.2, which had started going out to devices on April 13th (as version YNG1TAS0YL) but was halted on April 20th supposedly due to a new "OK OnePlus" feature (Edit: but was most likely due to the wakelock bug), is now resuming its rollout under a newer build: YNG1TAS17L. 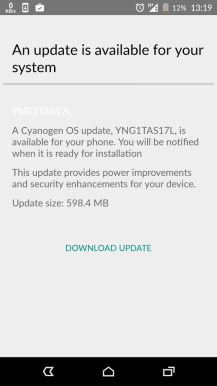 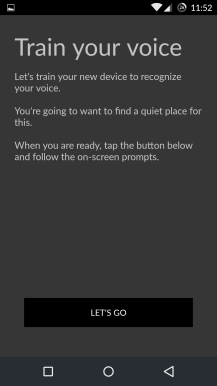 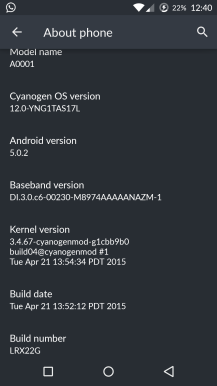 This new version does indeed introduce the "OK OnePlus" option to unlock your device with your voice after training it to recognize it. Edit: it obviously, and most importantly, fixes the wakelock issue that had plagued the previous OTA. According to a Cyanogen source, we also know that it applies an unnamed security patch and fixes a few bugs with the device's themes. The problem of the ringer and notifications volume not getting linked together should also be gone now. A OnePlus Forum thread also mentions that the Messaging app's recurrent crash on boot shouldn't occur anymore and the OTA's failure to install due to encryption has been fixed.

The OTA update weighs a little less than 600MB. You can start frantically checking for it on your phone or, better yet, there's a direct download link to the file below. Let us know if you find any other goodies.

Steven Kondik has clarified on the OnePlus Forum the reason for the OTA's rollout halt. He also explained that the OTA will first show up for those who updated to the previous Lollipop build and then for those who are still on KitKat. (Thanks, Patschi!)

Just FYI, the reasons why we stopped the initial rollout are because of a problem updating encrypted devices from 11 to 12, and a couple of bugs that we felt were critical enough to fix before continuing (mms/telephony/themes). We also had an error in our production build environment that broke voice wakeup.

Here's what we are doing right now:

1. Rolling out the new bugfixed update to users already on CM12

2. Resuming rollout to users still on CM11 tomorrow (it's late here). You'll actually first see a small 8MB update which will prepare the device for the real update (required if you are encrypted), this will immediately be followed by the new CM12 update.

I apologize for the delays.. This is why we do staged rollouts though. Lots of stuff (especially among a crowd like this that might not be in a fully stock state) is really tough to account for when doing OTAs, so we closely watch the diagnostic data and make our decisions based on it.

It's perfectly safe to sideload the build onto your device even if you're encrypted.

As for "OK OnePlus," Artem has been having the same issues that were mentioned in the comments here. He had some trouble setting it up and once he did, he's finding it only responds to him when he's close to the phone and very loud. There's another screenshot of the feature's (failed) setup below. 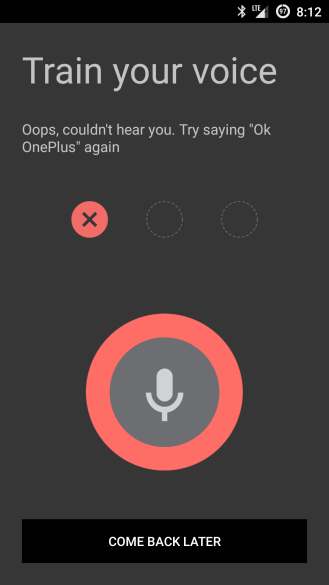 Official: LG Watch Urbane Will Be Available On The Google Store In 13 Countries By End Of The Month

LG Shares More Details About Its G4-Bound UX 4.0 In Another Teaser Video