Let's get it out of the way: American wireless carriers suck. None of them are actually good. When you think about the internet and your connection to it in the context of your home or apartment, none of the crap carriers get away with would fly. And that's why we're constantly trying to figure out who has the best deal, who grandfathers, and how to get a phone that doesn't force you to sign a contract, or a plan that'll bleed your wallet dry.

Some carriers, like T-Mobile, are trying to change that to an extent. But they still play the same game as so many others - soft data caps that don't scale in a linear fashion (unless you opt for the unlimited plan, which still has a soft tethering cap), limited plan choices, carrier-locked phones out of the box, rollover schemes, bloatware, and a boatload of legacy and prepaid products that make it unnecessarily confusing to just choose a plan that meets your needs.

I don't want to harp on T-Mobile too hard since they're doing their part to shake off some of the - and excuse me here - exceedingly bullshitty shenanigans AT&T and Verizon have been screwing their customers with for years. But even T-Mobile is still living in "pick a plan"-land with rigid access options that make you pay for things, like extra data, which you may not actually use. You can change your plan from month to month to better suit your habits, but carriers don't make this particularly easy, and that's completely intentional - they would very much like to bill you for a level of service you don't actually need or didn't effectively utilize, and count on that income to continue steadily for the next 24 months, or however long your device payment plan is.

It's this model that is so annoyingly broken here in the US, and it's the model that Google's Project Fi wants to abandon. The idea of paying for what you use and, more importantly, not paying for what you don't, is not revolutionary. But it's been a carrier holdout for years, and anyone trying to fight it has generally done so from the prepaid side, where you're making compromises on other fronts.

Now, let's get this other obvious part out of the way: $10 per gigabyte is not particularly cheap. In fact, many carriers' plans even including the cost of voice and text scale well below this rate if you buy particularly large data buckets. Why, then, is Google selling wireless data access at such a remarkably not cheap price? Let's go to the chart - comparing Project Fi to existing post-paid plans. 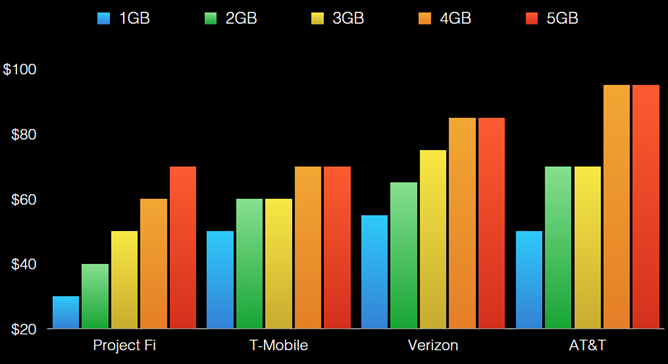 For Verizon / AT&T: based on discounted Next and EDGE individual plan rates.

If you use less than 5GB of data per month, Project Fi is cheaper than the three largest wireless providers in America. If you use less than 4GB, it's cheaper still. Less than 3GB? Even cheaper! 2GB or under? Still cheaper. And at 1GB or less, Project Fi may be the cheapest fully-featured smartphone plan in America. This isn't accounting for the granularity in billing Project Fi will offer, either, because if you don't go over your data cap, you get refunded the remaining value of the data you purchased on the next month's bill. So, if you buy 3GB and only use 800MB in a given month, you'll get $22 removed from your next bill. But if you buy 3GB and use 3.3GB, you won't pay the full $10-15 extra Verizon or AT&T charge, because Google prorates it - you'd pay just $3 more than normal. I can get on board with saving that money.

The inevitable counterpoint is "but <prepaid plan x> is cheaper / has unlimited data." And yes, prepaid plan x may well allow you to download more stuff, and your operator may not enforce tethering restrictions, and your prepaid plan may not even have network speed caps (see: Cricket, which limits you to 8Mbps on LTE).

But here's the thing: every prepaid plan has a catch. Project Fi... doesn't. You pay your $20, and then you pay for the data you use, and you can use said data in whatever capacity (apart from torrenting or running a server or something, which I'm guessing is in the ToS) you want, and you don't have to worry about getting your service throttled (or canceled) because you used your phone as a laptop modem for an afternoon.

And that's because Project Fi isn't designed like a prepaid carrier. You don't get features like tethering or roaming stripped out just because you want a good deal. Project Fi gives you unfettered tethering and no-additional-cost "3G" (256Kbps, they say, which is very strictly 3G I guess) data coverage in 120 countries around the world, a la a similar feature on T-Mobile, and free international texting. Plus, you get Google Voice's stupid-low rates on international voice calls if you're making them over Wi-Fi, from anywhere in the world.

Overall, Project Fi is, on paper, actually an excellent value and solves a lot of my personal pain points about US carriers, post and pre-paid alike. But this is also where things start to unravel - Project Fi has all the markings of a Google experiment: a great plan, executed exactly one year before it can actually be truly great. (Edit: This post previously referenced Project Fi and T-Mobile LTE coverage using an incorrect map - Project Fi should use T-Mobile's full LTE network as far as we know.)

The Project Fi LTE map, at this point, is not very impressive, and there are other problems, too. Limiting the service to Nexus 6 owners means that most people can't even use Project Fi right now, and the size of that phone (and its price) likely mean many others won't want to use it until a new compatible handset arrives. That makes Project Fi an impractical option for the very, exceedingly large majority of people right now.

Project Fi doesn't offer any high-speed (eg, real HSPA) international roaming, it doesn't offer group plans or family discounts, and it doesn't have HD Voice (that I am aware of - Google's FAQ makes no mention of it). It's limited to a single phone (that a lot of people on Android Police don't like), and the price structure makes it pretty much worthless to data hogs.

The thing is, if a single American carrier were to adopt this kind of simple and fair pricing scheme (no penalties, no soft or hard caps, fully prorated data, no throttling, no tethering restrictions), people would flip - and that's because most of what Google is trying to do here is good. They're simplifying the process of budgeting for your phone bill by making it a simple question of how much data you want, with no risk of overpaying or overusing, and otherwise getting out of the way. Why don't other carriers adopt such simple plans? Because they'd make less money, and that's all it really comes down to.

Project Fi isn't going to be a wireless service option for most of us any time soon - that's just reality. But for those of us who can see themselves on this kind of plan (and inside the confines of that coverage map, like me), it's a breath of fresh air.

For now, it's rather easy to make fun of Project Fi as lacking competiveness in terms of coverage in the post-paid world and as failing to out-price in prepaid (though Fi is still cheaper than many prepaids), but that's missing the point. The point is the philosophy: maximize features, minimize complexity. By being an MVNO (mobile virtual network operator), Google can act as a buffer between the interests of consumers and the interests of the companies actually building out the networks who, historically, are pretty awful.

And even if Project Fi doesn't get it right, someone else will. I fully embrace the notion that Google could drop this whole thing two years from now - but I have a feeling it will leave a lasting impression on the wireless industry even if it does fail. Google is blazing a trail of real simplicity, of a customer-centric model that finally sheds the burdensomely simple (read: restrictive) "plans" and cop-out "features" like T-Mobile's Data Stash or AT&T's Data Rollover that just seek to coddle consumers who are underutilizing and overpaying for their service. There's no special rate for bringing your own phone, they won't play the "pay your ETF" game of musical chairs, and there's no more worrying about going over your data cap by just a bit. You pick a number of gigabytes, you use the service, you pay Google some money based on how much you used, and that's it.

The only reason it doesn't sound as gloriously simple as it is? Because most of the good parts are so obvious that it hurts. And I won't knock Google for doing what I know the big four won't simply because it wouldn't line their pockets as well.

[Update: It's Back] Deal Alert: 64GB PNY Turbo Performance MicroSD Card On Sale For $24.99 On Amazon

Official: LG Watch Urbane Will Be Available On The Google Store In 13 Countries By End Of The Month