At this point, there is no real shortage of "smart" launchers in the Android ecosystem. Of course, we have to put "smart" in quotation marks, because there still is a void in terms of truly good products trying to do that. So when I tell you that Bento is a new entrant in this bustling market of context-aware launchers, you shouldn't ask, "do we need another one?" You should ask, "is this the one that will really do a great job?"

Bento is a venture capital-backed project that is in a semi-private beta at the moment. As I go over the app in its current state, it's important to keep in mind that it is not a finished product at this point and is not the kind of wide-release beta that you might be accustomed to. Chances are that the ultimate stable release will have significant differences from the one I have been testing.

It's important to understand what Bento is trying to do, beyond being "smart." Certainly, part of the goal behind this app is to put the apps and information you need front and center. As far as that goes, its aims aren't entirely different from some of its competitors: Aviate, EverythingMe, even HTC's new Sense Home. A good smart launcher needs to learn from the user's behavior and present information relevant to this moment and downplay the resources that aren't. It should also unearth apps that you don't normally remember to use when appropriate. Otherwise, what would be the advantage over your own, static configuration in a conventional launcher?

The "how" is the way Bento differs from other, ostensibly similar products. The developers claim an ambitious goal of "reimagining the mobile interface" with cards. Of course, we see card-based interfaces on Google Now and elsewhere, but Bento wants to use them differently.

A card in Bento, at least in the vision of the developers, is its own self-sufficient entity. A YouTube card should be useful without regard for whether the user has the Youtube app. That means Bento is accepting the tall task of building many app-like experiences into its own, single app. While this leaves open the possibility of redundancy—I already have a Reddit app on my phone, so I don't have to use Reddit within Bento—it may be a worthy tradeoff for those times when it isn't.

From Concept To Product

If good ideas were all that mattered, all of us would already be chained down to a smart launcher. For Bento, it's all about execution. I will add another reminder that this is very much an in-development version, so some leniency is called for when it comes to rough edges. 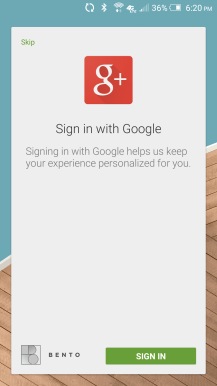 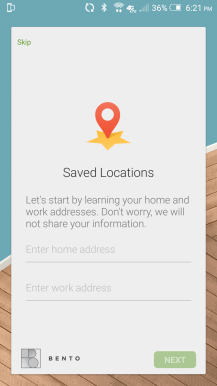 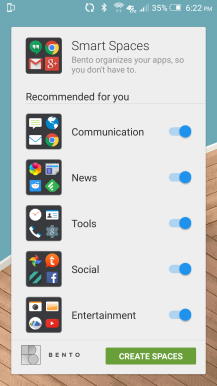 Setup is fairly straightforward. Bento wants your Google account to learn...something, but I'll take their word for it. I assume this should make it easier to keep your personalizations in sync across devices/installs. Rather than try to work it out itself, Bento also asks for your home and work locations, which makes sense. Google tries to figure out where you live and work without asking and it sometimes just misses the mark entirely. Lastly, you can choose which "spaces" you want, which are groupings of apps that serve similar functions.

Each space gets its own screen, which you can then rearrange as you please. Here's a look at the spaces it served me on my phone, before any customization on my part. Keep in mind, though, that these screens are peripheral. Your starting point is going to feel far less familiar than the spaces, which are more or less regular homescreens, just well organized.

The real homescreen, the one that you get to when you press the home button, looks like this: 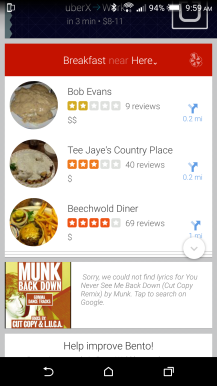 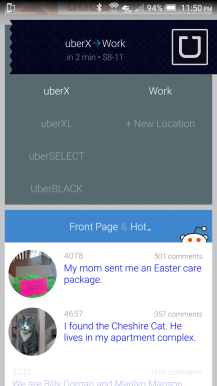 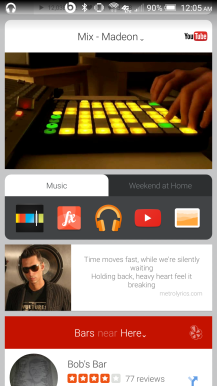 Here's your first taste of Bento's take on cards. You'll notice that your notifications are worked into this stream as well. At this point, the number of cards offered by Bento is limited. Their website lists these as the currently-supported services:

Thus far, I've come across each except ESPN CricInfo, which I don't anticipate seeing if Bento gets to know me well enough. This is far from an expansive list, with an obvious bias towards music and video, but the Bento team promises many more are to come. In fact, they optimistically say they anticipate "limitless cards, where Bento serves both as a distribution channel and an instant personalization layer."

I can see the promise in the cards. They did respond fairly predictably to me using Play Music. Related cards dominated the top of this feed, as you can see below. 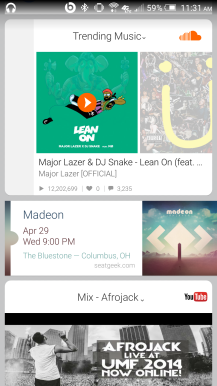 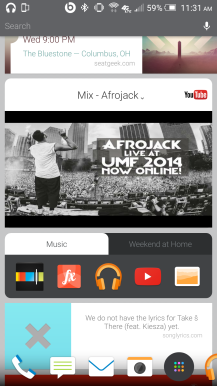 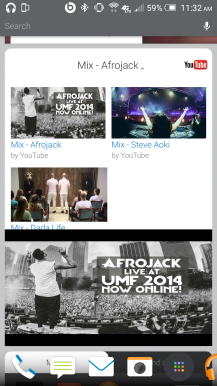 The lyrics card could be pretty useful and delivers something that I often want, but am unwilling to search for myself. The recommendations on the YouTube card updated as soon as I started listening, going from just videos that were popular to mixes by artists I had played recently. I can play videos within the card fairly smoothly, which is the best evidence of the "no extra apps needed" vision.

A folder of suggested apps appears as you can see in the second screenshot above, this time with a tab for music. I didn't find this very useful as two of the apps were related to photos and another was for podcasts. Generally speaking, I don't need extra music apps while I am already listening. The "weekend at home" tab, which appears somewhere on the feed whether or not I am streaming audio, is also in need of some work. 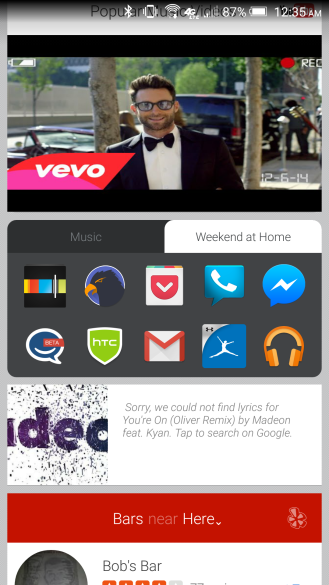 I just don't use most of those apps very often, so it's unclear to me how Bento came to recommend them. HTC Guide shouldn't be turning up in any predefined algorithms, if that's what it uses in the absence of usage data. Bento's developers tell me they have a machine learning model that will improve both as you use the app more often and as Bento gains more users. Over a few days of use, it has gradually improved. Having thousands more people to learn from will also probably lead to big gains in accuracy.

Another card I found to be a mixed bag was Reddit. I really like Reddit, so I don't mind having this on my homescreen. It seems to update at a logical rate and even boasts some configurability: you can sign in and choose both the subreddit and sorting method for the card. Tapping on a post or image, though, just acts as a Reddit link that can be opened in a browser or client app. 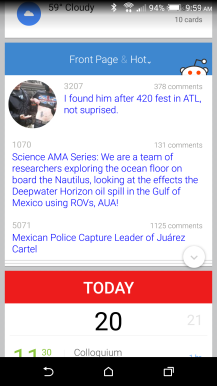 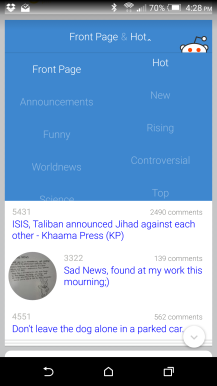 Maybe these are just kinks to be worked out. This is an ambitious idea, after all, so it's no shock that there are some big limitations in the early going. Cards like Reddit, which have some content partially obscured, can be expanded. Here's a couple GIFs to give you a better feel for the navigation, which has improved significantly since I began trialling Bento.

A surprisingly polished feature which I don't want to neglect to mention is the built-in search. This is placed rather subtly at the top of the card feed, but to me is the best integrated phone and web search I have seen. The developers tell me that they put the effort in on this feature due in large part to their disappointment in Google Search's phone search. 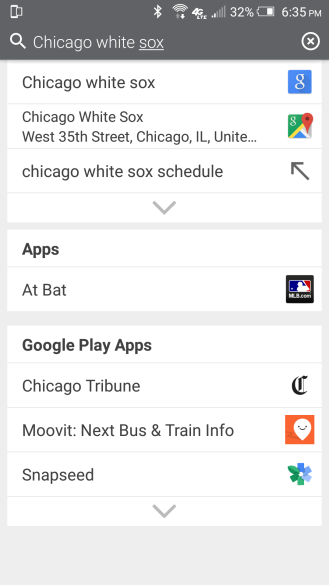 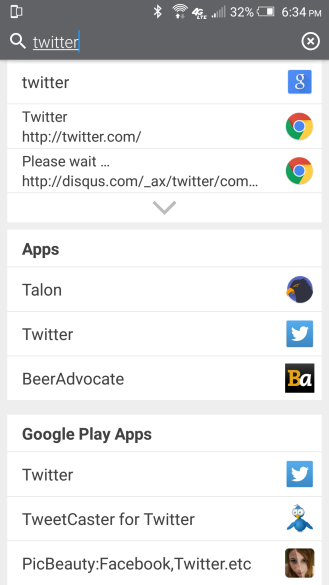 These are two exemplar searchers where I felt Bento did a good job. "Chicago White Sox" gives me the ability to perform a web search, navigate to their home ballpark, use the MLB At Bat app, or download the Chicago Tribune to catch up on news. Coming up with MLB At Bat for this search was especially impressive, in my opinion. "Twitter" also gives me Talon, a third-party Twitter client. It does so first, which may be the result of my using Talon rather than the official app, which shows Bento has learned from my usage patterns (or got lucky).

Compare to these same queries in the Google Search app, after prompting to search my phone rather than the web. 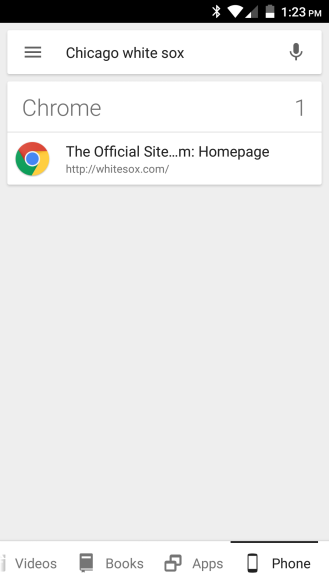 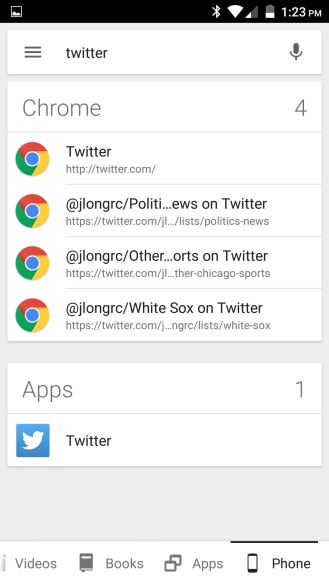 If you're looking for some proof that Bento has some real intelligence in its inner workings, here it is.

Bento has a solid premise and there is some good evidence that it will realize that potential. Pre-release issues aside, it will be a rather unique entry in the launcher marketplace, which is always welcome. The goal of having cards that function in place of installed apps isn't completely realized yet, but Bento has a proof-of-concept that is impressive.

It is different enough from conventional launchers that it will be too jarring for some. No matter how strong the implementation of their concept, many people will understandably not want to rethink the way they use their homescreen in the way that Bento demands. That's okay, though, because what we certainly don't need is more versions of the same old thing. Nova, Action Launcher, Google, and others have the typical launcher experience pretty well covered.

In some ways, you might say Bento aims not to be a mere launcher. That is, you shouldn't need to do so much launching when you have cards that can carry out many of the tasks you might otherwise do within dedicated apps.

If you want to join the beta, sign up at Bento's website. At this stage, you may deal with a few bugs, but in my observations the developers have been very attentive to both problems and suggestions.