Back at MWC, while everyone was waiting for Sony to announce its follow-up flagship, the Xperia Z4, the company decided to keep it under wraps and instead unveiled the mid-range Xperia M4 Aqua and the Xperia Z4 Tablet. Today, the phone has finally been made official in Sony's home turf of Japan during a press conference that made all of the Z4's details public but left out any information regarding its global release or price. 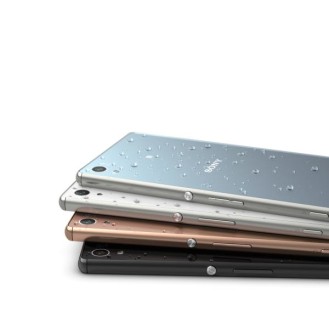 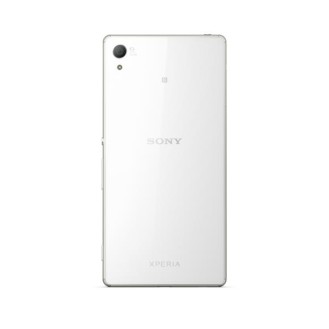 The Xperia Z4 follows the same design as its predecessors, which can be a good or a bad thing depending on how you look at it. The squarish shape, metal frame, and glass back are part of the brand's identity, but at the same time they're iterative and have become boring. A few notable outside differences (compared to the Z3) find the speakers pushed to the edge of the top and bottom bezels for a more refined front panel design, the nano SIM combined with the MicroSD in one slot for less ports and cleaner lines on the side of the phone, and finally a cap-less MicroUSB port on the bottom of the device. You won't have to fiddle with it each time you want to charge your device or worry about making sure it's closed before you immerse it. But thankfully, the streamlining didn't affect the dedicated camera button, which keeps it place and makes it possible to take photos and videos underwater without messing with the touchscreen. Under the almost-unchanged hood, you'll find a set of almost-unchanged specs from the Xperia Z3. The display remains a 5.2" 1080 x 1920 pixels Triluminos panel, there are still 3GBs of RAM, the back camera keeps its 20.7 MP resolution with the 1/2.3" sensor capable of shooting 4K video, and there's the same smorgasbord of connectivity options (Wi-Fi a/b/g/n/ac, Bluetooth 4.1, NFC, MHL, HSDPA, et al.) with an enhanced LTE Cat.6 radio.

The more significant differences affect the processor, front camera, and onboard storage. For better or mostly worse, Qualcomm's now infamous 64-bit octacore Snapdragon 810 is powering the Xperia Z4. The front camera has also jumped up from 2.2MP to 5MP with digital stabilization and a wide-angle for all 'dem selfiez aficionados. And like all of 2015's flagships, the Z4 has upgraded its default storage option to 32GB. 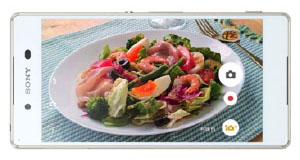 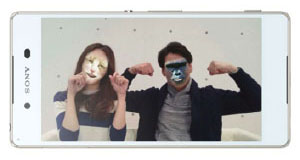 The Xperia Z4 runs Lollipop 5.0 with Sony's skin on top. The company's press release emphasizes some changes made to the camera's software, including an ISO12800 setting, a "cooking mode" for Instagram foodies that apparently captures "the freshness and three-dimensional sense of cuisine" (lolwut), and what seems to be a face-detection mode that randomly superposes animals like cats and gorillas on people's faces (yo dawg!). Or something like that. I'm sorry, I had to guess what the last two features were from Sony's screenshots and Google Translate's Japanese to English prowesses. The Sony Xperia Z4 will be available in Japan this summer in white, black, copper, and "aqua green" (which looks more like a blueish white pastel to me). It will have its own set of custom accessories including the now ubiquitous case with a square window cut, and a desktop stand / charger. As mentioned at the beginning of the post, there's no word on pricing or worldwide availability, but you should expect it to go for the same price as the Z3 and roll out in the rest of the world toward Q3 2015.

Reports Suggest 2013 Nexus 7 Units Are Failing At An Alarming Rate, Not Likely A Result Of ...