A little less than one year ago, I called the OnePlus One "the best flagship phone you can't buy" in my initial review. The phone had some impressive hardware at an amazing price, and in many ways it still does, but the system of invitations and qualifications built around actually buying the One made obtaining the device an exercise in frustration. It's taken them eleven months (and what seems like dozens of separate promotions and half-measures), but you can finally order a OnePlus One without an invitation of any kind starting today. 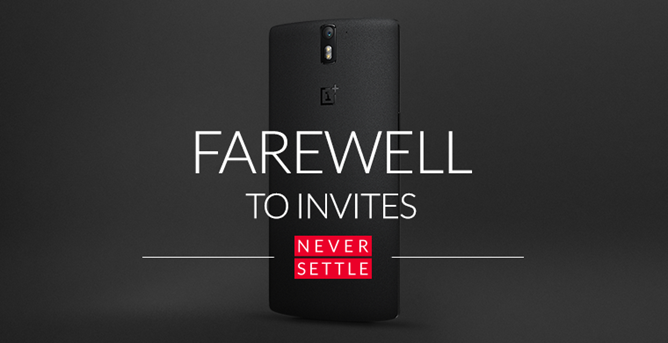 The announcement was made on the OnePlus website, forum, and Facebook page. There's a big red "buy" button on the main store, and both the 16GB white and 64GB black versions ($299 and $349, respectively) are currently in stock. You don't have to wait until Tuesday, you don't have to beg the official Twitter accounts, you don't have to spend time sucking up on the forums. You can exchange your legal tender directly for an electronic device. What a novel idea. OnePlus is offering discounts on various accessories to celebrate.

Of course if OnePlus had done this a little earlier, the company might have earned a little less scorn from frustrated would-be buyers. Most of the promotions for the last few months have simply focused on limited direct sales, and the less said about some of the company's ill-advised social media activities, the better. It doesn't help that a reliable report from Bloomberg is already drumming up interest for two new OnePlus devices to be released later this year, though whether or not those phones will be offered for direct sale isn't known.

One more thing: a scheduled over-the-air update for the One has been put on hold so that the company can implement a new feature. OnePlus co-founder Carl Pei had this to say on Twitter:

OTA rollout was paused due to new "OK OnePlus" feature being added. Should resume mid week.

Pei later clarified that this is specifically for the recently-released CyanogenMod 12S, not the company's in-house Oxygen OS. "Okay OnePlus" is almost certainly a voice activation feature similar to "OK Google," which is now built into the Google search application - Pei even told Twitter followers that "it will work even when the screen is off." From context, it sounds like the voice activation may simply replace the "OK Google" phrase and activate the search function. It's basically just a bit of vocal branding. Those who currently have CyanogenMod 12S will receive an OTA update to enable the feature, and presumably it will come to Oxygen OS eventually.