There's a new Humble Mobile Bundle already up and running today, and it's another developer tie-in like the previous Sega and Crescent Moon deals. This time it's Tin man Games, which is the developer of all those neat gamebook adventures. You can get as many as 10 of these game right now with more on the way. 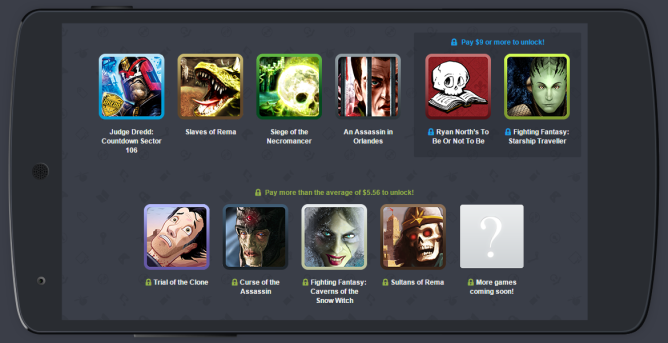 In case you've never played one of these gamebook things before, it's half short story and half RPG. You read through the book, making choices and solving puzzles. Combat is controlled by the roll of the virtual die, and your own smart planning, of course. Each one of these games sells for $4-7 in the Play Store, so this bundle is a great value.

Pay anything and you get An Assassin in Orlandes, Siege of the Necromancer, Slaves of Rema, and Judge Dredd: Countdown Sector 106. Pay above the average to receive Sultans of Rema, Fighting Fantasy: Caverns of the Snow Witch, Curse of the Assassin, and Trial of the Clone. Then there's a third tier that requires you to pay more than $9. That one adds Fighting Fantasy: Starship Traveller and Ryan North's To Be Or Not To Be.

As usual, your payment is split between Humble Bundle, charity, and the developers. More games will be added in a week's time, but you'll get those automatically if you buy now.

Samsung Announces The Galaxy Tab A For The US, Disappointing Specs In A Metal Chassis Starting ...