Back in 2011 when Amazon released its App Store, we cited the ability to try apps out in your browser before downloading as one of its top features. Later, you could also do that on phones and tablets. Well, things have changed. First, after an announcement made today, you will no longer be able to do this with apps from Amazon's store. Second, you probably won't miss it too much. 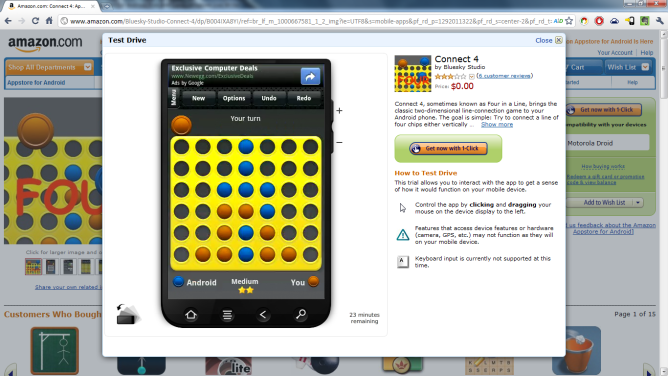 An early version of Test Drive.

At least, that's why Amazon says they are nixing it. Citing a precipitous drop in usage, they just didn't see the need to support a feature that was probably a pain to implement. Unsurprisingly, the main use case was to audit paid apps before actually forking over the money. What has changed, though, is how many apps are free to download and require an in-app purchase to unlock additional features or unlimited usage.

Even today, though, Amazon doesn't offer refunds on app purchases. If people weren't using it, it must not really matter. I know that I utilize the Play Store's 15-minute refund period rather frequently, but that has certainly been less of a factor since the freemium model came around.

Smart or not, the feature is toast. They announced today, April 16th, that they are getting rid of it effective yesterday, April 15th. Talk about an unceremonious ending for what was once a cool, differentiating feature.

Google Is Changing The Way It Shows URLs In Mobile Search Results To Include Site Names, ...