If there's one market I've seen change dramatically over the last three years or so, it has to be the portable speaker scene. It went from being a category with a few mostly niche products that you had to convince yourself to spend a couple hundred bucks on to something pretty incredible - there's easily something for every type of person, lifestyle, and budget on the market right now. And really, it keeps getting better. More features, better sound quality, improved portability, and increased battery life are all things that we continuously see these days.

While we've looked at waterproof (or completely submersible) speakers in the past, the Nyne Aqua stands apart from the crowd with one very unique feature: it's not only waterproof, but it also floats. So you can throw this little guy in the pool and keep the party going both in and out of the water.

The floating design is definitely unique, and is clearly what the entire speaker is based around. The unit looks somewhat like a small boat, with two openings in the center part. The audio drivers, which are relatively small given the overall footprint of the speaker, are found on either side, with all the controls in the very center. Speaking of, the set of controls found on the Aqua are pretty straightforward: volume, EQ, play/pause/speakerphone, and power. The EQ button toggles through four different presets, all of which are surprisingly different from one another. That makes it pretty easy to find the one that sounds best according to your ears and musical tastes, thankfully. But oftentimes something happens when a speaker is so uniquely designed: there's so much time spent on making it function well for activity X (in this case, floating), that the whole "it should actually also sound good too" thing kinda gets put on the backburner. That's not to say the Aqua sounds bad, per se, it's just...underwhelming. This is a crowded market, and I've tried most of the major players out there - Ultimate Ears, Logitech, JBL, Bose, Beats, etc. - if a speaker company wants its offering to be successful, it's going to need more than just a novelty feature to do it. It's gotta bring its A game, in sound, build, and features. It's possible to get away with not having a ton of unique features, as long as sound quality is exceptionally good (take the Bose SoundLink Mini for example - it's easily one of the best-sounding speakers on the market, but still keeps a simple design and feature set). But a speaker is meant for listening, so skimping in the sound department is never a good idea. 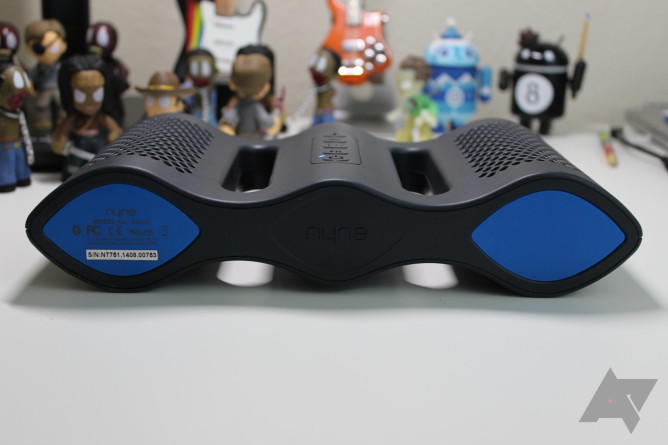 That said, here's the deal with the Aqua: it just sounds tiny. It clearly has small drivers, but since the overall size of the unit is what it is, I expected more. I've heard speakers half the size of the Aqua with more oomph to them (like the Transit XS from Soen for example), which is disappointing. I read one review on Amazon that likened the sound quality of the Aqua to a "$20 set of computer speakers," and I'd say that statement is approximately 97% correct.

Still, if you're looking for a speaker that can get around 10 hours of playback time on the lake or at the pool, the Nyne Aqua is probably your best bet - just don't expect a lot of power behind those tunes.

OnePlus Plans To Release Two Phones This Year: The OnePlus Two And A Cheaper Model