After a five year investigation of the search giant, European regulators are expected to launch an official antitrust case against Google tomorrow. The Wall Street Journal reports EU Commissioner for competition Margrethe Vestager will make the announcement tomorrow (Wednesday the 15th). Google will then be served with a "statement of objection" and charge sheet. At that point, the lawyers will begin legal wrangling that is sure to last years.

In the Google case, the EU is expected to allege that Mountain View unfairly promotes its own services over others in search. Google's share of the search market is even higher in the EU than in North America. If the EU and Google take this all the way, it could theoretically result in over $6 billion in fines. It's unlikely it would be anything that high, but Google might also have to abide by some sort of pro-competition agreement in the future.

This case will the be the largest for the EU Commission since the Microsoft investigation, which concluded over a decade ago. That case revolved around Microsoft bundling Media Player in Windows, which was seen as unfair to competitors like QuickTime and RealPlayer. Yes, really—times were very different. There was also an issue around server product interoperability. Microsoft was forced to release a version of Windows without Media Player, but of course that turned out to be essentially pointless.

The EU's case against Microsoft took six years to run its course (16 years if you count the full investigation). So nothing is changing tomorrow for Google, and I'm sure Mountain View will hire as many lawyers as it takes to get an outcome it can live with.

Google will surely have an official statement when the EU announces the formal start of the case tomorrow, but a memo has already been sent out to Googlers that explains the company's position. This was obviously intended to be leaked, and it was to Recode.

The statement is quite long, so I'm going to put it in a collapsed PR box, even though it's not quite PR. One thing to note, Google expects an investigation of Android to be launched tomorrow as well. I imagine we'll hear about that in detail if it happens.

Googlers —
As the Financial Times has just reported, the European Commission will tomorrow issue a Statement of Objections (SO) regarding the display and ranking of certain search results, in particular shopping. This is obviously very disappointing news, especially for the search team that has worked so hard to create a great experience for our users over the last 16 years.

First, a few facts about the SO process. An SO is not a final finding. It’s a document in which the Commission staff sets out its preliminary arguments so that the company in question can respond. Expect some of the criticism to be tough. But remember, it’s also an opportunity for Google to tell our side of the story. The back-and-forth over an SO can take some time (even a year or two), and in a number of cases has resulted in the Commission modifying their claims or settling the case. If the two sides cannot settle their differences, the Commission issues an infringement decision, which can be appealed in court.

We have a very strong case, with especially good arguments when it comes to better services for users and increased competition:

Better services for users: Google Search has improved tremendously since the days of ten blue links. We can now answer many queries directly, saving users huge amounts of time and effort–whether it’s the weather, directions to the local pharmacy, flights, or where to get the cheapest camera.

The competition is just one click away — and it’s growing. People can use Bing, Yahoo, Quora, DuckDuckGo, and a new wave of search assistants like Apple’s Siri and Microsoft’s Cortana, as well as more specialized services like Amazon, Idealo, Le Guide, Expedia, or eBay. In addition, users increasingly turn to social networks like Facebook and Twitter to find news and suggestions — where to eat or which movies to watch.

Mobile is changing everything — with the explosion of apps taking people directly to the information they want. Today 7 out of every 8 minutes on mobile devices is spent within apps. Yelp, for example, has said that over 40% of its traffic comes direct from its mobile app.

Competition online is thriving — despite what many of the complainants in this case allege. Indeed if you look at shopping, it’s clear that there’s a ton of competition (including from Amazon and eBay) that has not been harmed by Google’s own shopping service. Just look at the following graphs compiled using comScore data: 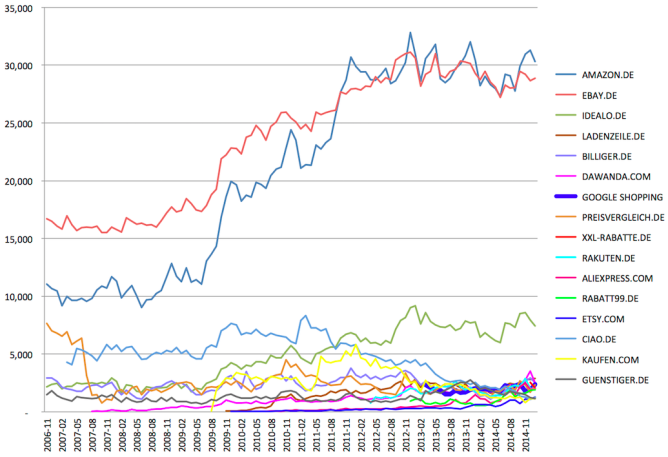 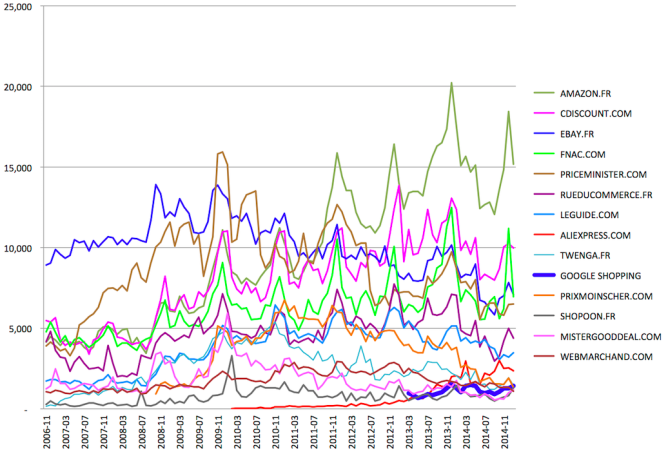 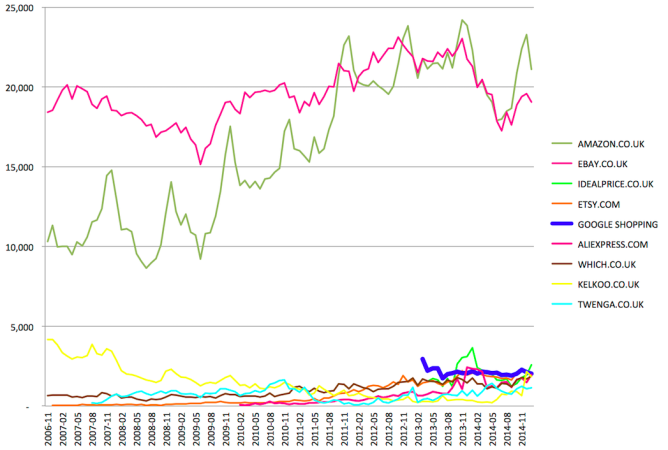 It is the same story with travel–another very competitive vertical: 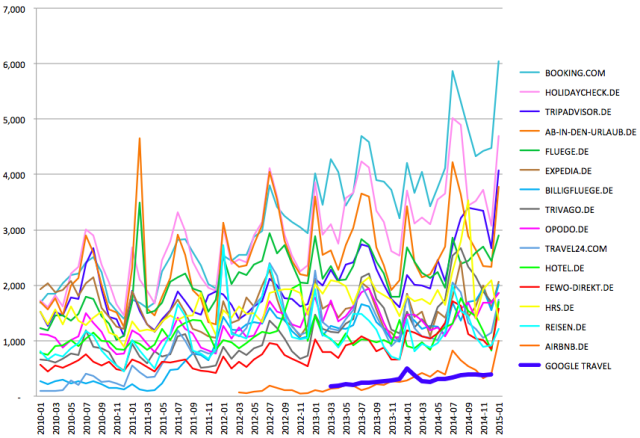 We believe that the Commission will also open a formal investigation into Android tomorrow. This is just the start of a process and does not mean the EC will necessarily take action (for example they opened and closed an inquiry into iTunes a few years ago). We have a very strong case on Android as well:

Android has lowered prices and increased choice for consumers (there are over 18,000 different devices available today);
It’s an open-source operating system that can be used free-of-charge by anyone;

We paid out over $7 billion in revenue over the past year to developers and content publishers;

Consumers decide which apps they use and download on Android devices. Apps that compete directly with Google such as Facebook, Amazon, Microsoft Office, and Expedia are easily available to Android users; and

Many of these apps come pre-loaded onto Android devices. Google apps, like Search, Maps, Gmail, and Google Play, are also available out of the box on many handsets. The recent Samsung S6 is a great example of this — there are pre-installed Facebook, Microsoft, and Google apps.

All told, consumers have a lot of choice — and they are exercising it. And many, many other companies have very successful mobile businesses — including Apple, the most valuable (mobile) company in the world.

Finally, we know the upcoming announcements will be distracting. But you can help in two ways. First, by not commenting on pending legal issues, internally or externally. And second, by focusing on what you all do best … building great products that serve our users and customers.