Hearthstone is one of the latest creations of the incredibly successful game developer, Blizzard Entertainment, the name behind famous titles such as Diablo and World of Warcraft. The company specializes in making immersive and addictive games and Hearthstone is no exception. Billed as "Deceptively Simple, Insanely Fun," Hearthstone is a card based strategy game with similar mechanics to other TCGs such as Magic the Gathering or Yu-Gi-Oh. I'm not sure why I bothered explaining any of that, this is a site full of "Android enthusiasts" (read: nerds) and it's not like you need an introduction to anything created by Blizzard.

Up until today, Hearthstone has only been playable on Android tablets. With the new update, the app is now available on all Android devices. As one might expect, the phone version has been changed slightly from the original tablet app to accommodate the smaller screen sizes. I played a quick round on my Z3 prior to writing this article to capture some screenshots and, based on my limited experience, I think the new format works quite well. There are small tweaks present throughout the app. For example, the playing board has been shrunk a bit and a couple more taps are required to select a card to play, but none of the changes detract from the flow of the game. Overall, I didn't feel that it was any more difficult to play Hearthstone on a my 5 inch smartphone than my 10 inch tablet. You needn't worry about losing your progress in the game - after downloading, just enter your Battle.net credentials to restore your card collection, custom decks, and currency. To entice you to download the phone version of the app, Blizzard Entertainment is currently offering a free classic card pack when you finish your first match on your phone. Now that you know it's available you can go ahead and dash off Leeroy Jenkins style and download it. You better hurry – you only have a couple weeks left this month to reach Legendary status! 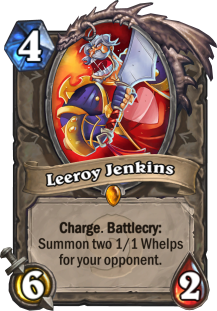 [Update: Google Responds, Expects Android Investigation Too] The European Union Is Expected To ...