Thanks to the fanatical culture that's grown up around mobile technology, we haven't been truly surprised by a new device in years. Even LG knows this: the company has been slowly revealing its upcoming G4 flagship, piece by pedantic piece, in the weeks leading up to the April 28th launch event. Last night an LG "micro site" was briefly published and removed, and it leaves very little of the G4 to the imagination. Google+ user Pedro Peguero Jr. grabbed some screenshots of the site. 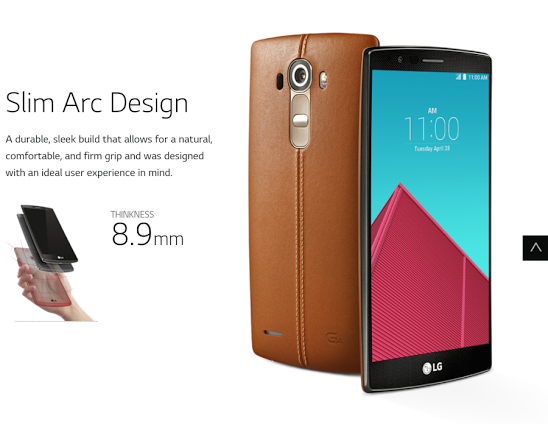 We already knew about the redesigned 13MP F/1.8 rear camera module with optical image stabilization and laser focusing, and the updated 5.5" QHD screen. The rest of the specifications page seems to be identical to last year's LG G3 (along with the software version), so we're not sure exactly what LG will update in that regard. Since the G Flex 2 uses a Snapdragon 810 the same processor might be present in the G3, though after those overheating problems LG might also swap it out for the slightly less powerful Snapdragon 808 or 805. Last year's model had 2GB and 3GB RAM options at different price levels; LG may or may not continue this slightly odd practice. 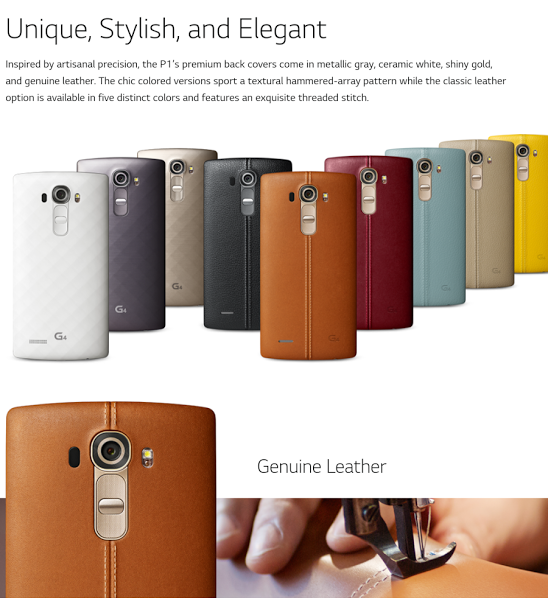 In terms of design, the G4 follows LG's relatively simple aesthetic: nothing but logos on the front, with a single speaker grille and the power and volume button cluster beneath the camera on the back. Pull that back off and you'll have access to a removable 3000mAh battery. (Incidentally, LG seems to be the very last of the major Android manufacturers to keep a removable battery option on its flagship - bitter Samsung fans, take note.) LG is showing off multiple shades of leather on the rear in addition to plastic; apparently the faux metal from the G3 didn't win over many fans. In contrast with the leather available on the Moto X, this phone has a stitched seam running right down the middle of the rear panel. It looks rather spiffy, though of course that's open to interpretation. The advantage of a removable rear cover is that customers should be able to swap out new leather and plastic covers whenever they want. 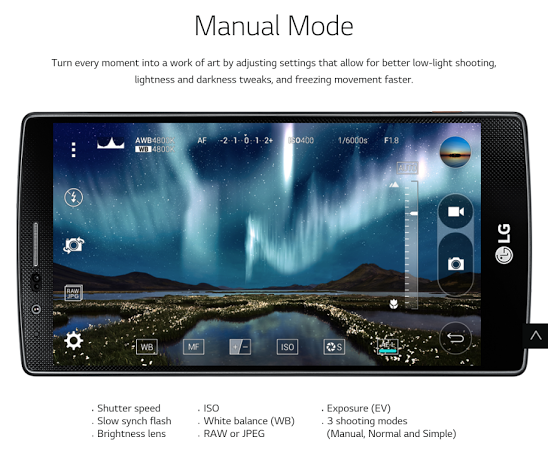 The dimensions of the G4 are fairly typical for a phone with a 5.5" screen: 149.1mm x 75.3mm x 8.9mm. While not the skinniest phone around in any particular dimension, it does allow for a large battery. The software on the leaked site says "Android 4.4.2 KitKat," but I'd guess that's a copy error. LG is already sending out over-the-air updates to Lollipop, so I'd be amazed if the final phone doesn't come with Android 5.0 out of the gate, with 5.1 being something of a longshot. LG will add its own skin, of course, but the DSLR-style manual camera shooting mode looks interesting. Other features include a somewhat pedestrian 2.1MP front-facing camera, wireless charging capability, NFC, and HDMI-out via a SlimPort-enabled USB port. 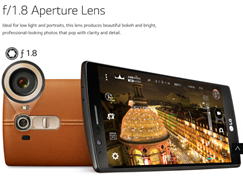 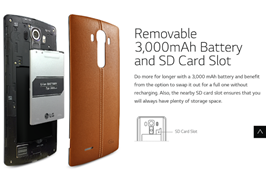 With the launch still more than two weeks away, all of this is subject to change... but it probably won't. So, will anyone take the LG G4 over Samsung and HTC's latest offerings?

It looks like almost all of the information from the specs page was filled in with the LG G3's information as a placeholder. We've updated the story to reflect this.

Amazon Reverses Decision: The Original 'Postal' Is Now Available On The Appstore For $1.99, ...