Want to buy Google's developer kit for Project Tango, the tablet that can perform real-time 3D spatial mapping? Well you can't - not without an invitation, anyway. But for at least some of the applicants who have been invited to buy the Android-powered Tango tablet, the gigantic price tag is now a little more manageable. An Android Police reader passed along an email from Google offering Project Tango for $512, half its original price. 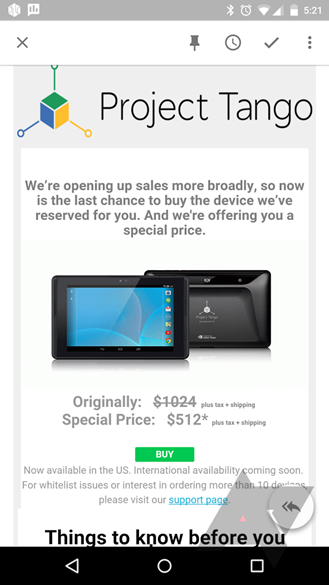 A few Twitter users are reporting the same thing, with varying degrees of enthusiasm.

aaaand @project_tango prices slashed by a power of 2. so I guess astroturfed kickstarters don't work too well. hope they do rentals soon

There's also this: the email claims that Google is preparing to "open up sales more broadly." Exactly what that means isn't clear. It could mean open online sales, like Google eventually provided for the ostensibly developer-only Google Glass, or it could simply mean that Google has ordered more units from its hardware supplier and plans to send out more invitations. A full retail rollout on the Google Store seems unlikely, at least in the immediate future.

Project Tango (or something very similar) is expected to hit shelves later this year, possibly via a hardware partnership with LG. On the other hand, we've heard nothing about a wide release in about nine months. Google's plans for the project and the impressive technology it contains are as murky as ever. You can still request a developer kit on the Project Tango website.

[Update: Amazon Too] Google Refuses To Allow Postal Game In The Play Store For 'Gratuitous ...

[Update: It's Live] Lyft Introduces 'Profiles,' A Social Networking Feature For Riders And ...