Chainfire, the developer behind SuperSU as well as many other popular apps and mods, has published FlashFire, which he dubs the "spiritual successor" of Mobile ODIN. FlashFire is, as the name might suggest, a tool for flashing ROMs, kernels, and mods without the need for a custom recovery. It could (upon stable release) make these tasks, which generally involve a lot of button pressing and a little elbow grease, drastically simpler. 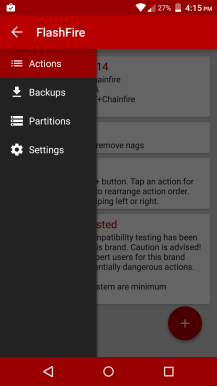 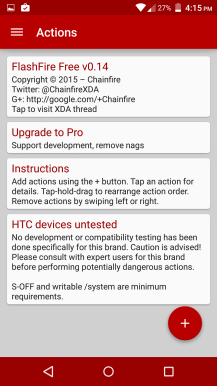 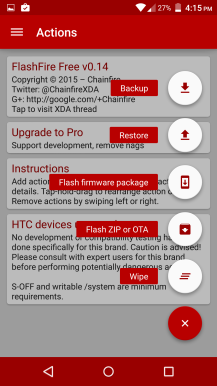 For owners of Mobile ODIN Pro, you will get pro features of FlashFire for free if it is installed on your device. With that said, FlashFire does not yet have any premium features. With nothing more than root access, FlashFire will flash OTA updates and compressed ROM files, adding SuperSU while doing so. You can also create backups of the current software on the device.

If you want to try it out, I can't emphasize enough how much this is an early release. Even when it becomes well-polished, misuse could turn your phone into an expensive paperweight really quickly. In a state like its current one, you really have to be careful. If you don't know how to flash things the hard way or rescue your phone via fastboot, you'll want to wait a while for FlashFire. Even if you do know how to do those things, I implore you to think long and hard about it.

So far, Chainfire has focused on support for Samsung and Nexus devices, but the spectrum of devices that will work is likely far larger. Still, you'll want to tread very lightly when using it on untested phones and tablets. To download, first join the Google+ community. FlashFire should appear in the Play Store shortly afterwards. Make sure to read through the support thread at XDA Developers and say a few Hail Marys before using.