Samsung's top-of-the-line Galaxy Tab S series is legitimately awesome, but the 8.4 and 10.5-inch models are also considerably more expensive than their competitors. For a short time Samsung is discounting both of them by $100 on its official online store. The base 16GB Wi-Fi models of the Galaxy Tab S 8.4 and Galaxy Tab S 10.5 are now $299.99 and 399.99, respectively, a sale price that's reportedly effective through Saturday, April 11th. Both tablets are available in white and bronze colors with free shipping. 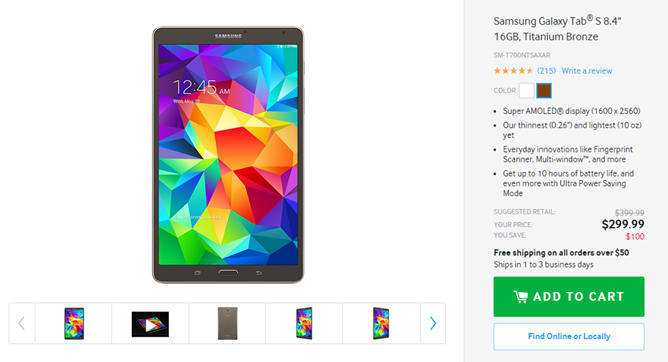 If that's not cheap enough for you (and it's still not all that cheap), Amazon has the Galaxy Tab S 10.5 for $20 less. As is its wont, the online mega-retailer has beaten Samsung's price on the larger tablet, currently selling it for $379.99 with free two-day shipping for Prime subscribers. Oddly, this price only applies to the "titanium bronze" version of the tablet; the white version is still discounted, but "only" down to $397.99. The smaller Galaxy Tab S 8.4 gets the same discount, from $399 down to $297.99 with Prime shipping.

If you want to know why the Tab S series is held in such high regard, it's mostly because they have the best screens of just about any tablet. Samsung pulled out all the stops with full-sized Super AMOLED panels, as opposed to the LCD-IPS panels on the slightly older Galaxy Tab Pro series. Want more info? Check out Cameron Summerson's dual review. Act quickly: once the deal on Samsung's site expires, Amazon is likely to revert the price as well.