For the last couple of months, we've seen a lot of big things happening for Drive, Maps, Search, and even the News & Weather app. It's been fairly quiet for the suite of Google Play content apps – but don't be fooled, big changes are coming. A recent Update Wednesday release of Play Movies didn't present any noteworthy or visibly obvious changes; but a look inside revealed a couple of hints about upcoming changes. Just two days later, a brand new release of the Play Store came along to not only fill in some of the gaps, but to add even more interesting bits. That's right, it's a double-header teardown of the Play Store and Play Movies & TV apps.

Note: Google announced the first bundle along with extras shortly before this teardown could be published. I chose to include the original text, as it was written, in case it gives some insight into what Google is building. I've also added additional notes to the end of both sections. Don't worry, there's some good stuff after bundles and extras, as well.

Every movie streaming service has its own ways to drive sales, usually through discounts or special offers. Since the launch of Play Movies, Google has only ever sold or rented films on an individual basis. Now it looks like Google is preparing to launch "bundles" of movies. The evidence is a bit sparse, but a single string from the Play Store spells out an unmistakable link between movies and bundles. Customers will be able to purchase or pre-order collections of movies put together by Google and its partners.

From the Play Store:

When users open up Movies & TV today, they are presented with a list of recommended titles. Based on code found within the app, it looks like bundles will appear in this stream. As far as presentation, the implementation doesn't seem quite complete in the Movies & TV app, but it's probably only meant to advertise the movies using pre-made banners. The Play Store will continue to handle the actual transactions, reviews, and any other information customers are actually going to look at. Three new layouts in the Play Store give the basic structure of what we can expect to see when Bundles appear:

Believe it or not, Google already offers at least one semi-functional Bundle, but it doesn't offer the best buying experience. The Fast and Furious movie franchise is currently available in the Play Store, packaged up as if it were a TV series. For whatever reason, this required chopping up each movie into 3-part segments. 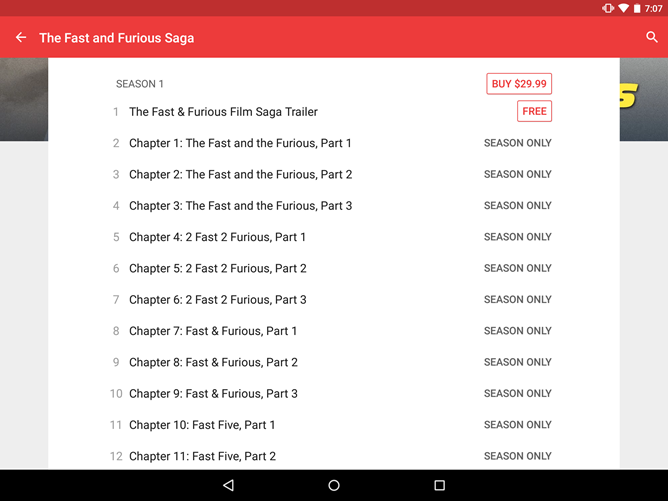 Google used a hack to offer a Bundle once.

While it's difficult to be certain, it looks like the movies acquired through the new bundles will be treated exactly like regular movies, rather than given totally separate listings. It's important to note, there will be some content that can only be acquired through bundles, but more on that in the next section. Unfortunately, there are no signs to suggest that owning an individual movie will grant any sort of discount on purchasing a bundle that contains it. Not that this sort of thing should be expected, especially since it could be complicated to work out the details, but it would have been nice to see.

Naturally, the reason for bundling movies together is usually to offer a package that is cheaper than getting all of the movies individually, but it gets the customer to spend more than it would cost to buy just the movies they enjoy most. This is a good thing for consumers, because it adds another buying choice that might save them a little bit of money. On the other hand, this means we'll eventually be faced with the opportunity to buy the Indiana Jones set with that miserable sequel. Seriously, let's pretend Kingdom of the Crystal Skull never happened.

As mentioned above, Google just announced its first bundle is the Star Wars saga. Each movie is priced at $19.99, or the whole bundle can be had for $89.99 (about $30 off). The bundle links to each of the individual movies, mostly confirming there won't be multiple entries for a movie that appears both alone and in a bundle. (This is a workaround some services have used in the past.) 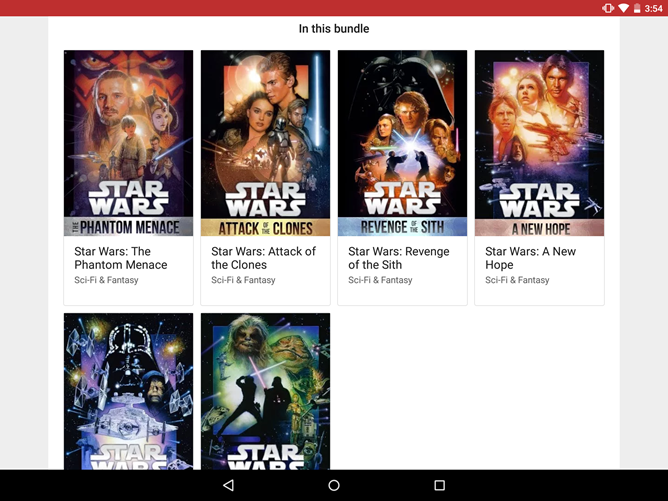 I'd like to think the Fast and Furious package above will be replaced with a proper Bundle, but I have a feeling it won't.

One great thing about buying movies on physical discs is that they usually come with special features, outtakes, and other footage to go with the film. Strangely, most streaming services are almost universally devoid of extras, choosing instead to include just the primary film. Perhaps this is because of licensing restrictions, additional costs, or maybe it's just harder to present extras to users in a meaningful and intuitive interface. Whatever the reason, hardcore movie fans often stick to physical media just so because they're simply getting more content. Now it looks like Google is ready to change the landscape by adding support for "Extras" in the Movies section.

As far as strings, that's it. Yeah, it's pretty sparse, but there really doesn't need to be anything else. From a close look at the code, it's clear that "Extras" is used simply as a heading above a list of bonus footage. These videos are effectively just like movies, but they won't be sold individually. In fact, the code that flags an Extra is very nearly identical to that of Bundles, including a method called moviesBundleEnabled which confirms that there are multiple movies sold as a package, or just a single movie with bonus content.

There are two layouts for representing additional content. The first is named extras_content_list_module, which only shows a title and subtitle. A more extensive version is called extras_item_snippet, which is made up of a single bar with title and duration, and below that is a section for "expanded content" that may contain a longer description, images, or just about anything Google wants to include.

As it turns out, Google also tried to include a pretty massive amount of bonus footage in the Fast and Furious hack shown above. The movies are organized in chronological order (yes, Tokyo Drift actually is supposed to be last), and the extras appear below. (Wait, did I just confess to having that much knowledge about this franchise?) 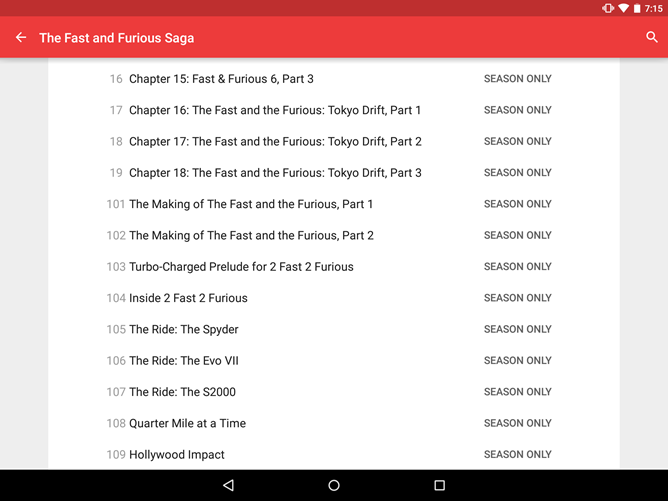 Much like Bundles, Google is enabling Extras with the new Star Wars collection. Each movie is set up with its own set of Extras, which is certainly better than making them exclusive to the Bundle. These initially show up as just a list of titles and durations, but tapping on any one of them will pop open a still from the video with a description below. 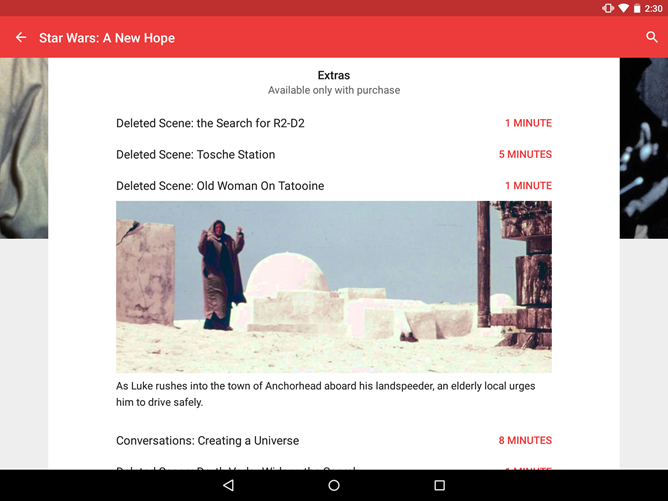 Reading through user reviews for movies on the Play Store is not entirely unlike trying to spoon-feed your own brain to a paraplegic zombie... This can only end in failure. Actually, let's be brutally honest – user reviews throughout the Play Store only look good when compared to the utterly appalling things people say in YouTube comments. But I digress.

It's pretty obvious that user reviews haven't been as helpful as they should be, so Google is working to add reviews by professional movie critics so potential customers don't have to wade through masses of childish and unhelpful comments. This is hardly foreign territory, Google went so far as to buy a company that is dedicated to reviewing restaurants just to integrate that data into Maps.

The only new resources related to reviews from critics are the two icons above, both of which only appear in Movies & TV, for now. It's fairly obvious that the critic_avatar image is used for critics, and the account_circle_white image for regular users. Ignore the fact that they have very different dimensions and have completely dissimilar names; what matters is that a single line of code determines which of these two icons is shown, and it makes the decision based on whether a review is from a critic or a regular user. This leads me to believe that the two types of reviews will be found at different spots in the interface.

Movies & TV exhibits more progress on this feature than the Play Store, but both of them have significant amounts of new code, particularly classes containing the name CriticReviews.

The success of professionally written reviews will largely depend upon how well they are positioned for customers. I haven't seen any clear signs about where they will go, but it's hard to imagine they will be hidden at the very bottom like Google has done with Zagat reviews in the Maps app. No doubt, there will be more to come on this in the future.

I'm not going to spend a lot of time on this because, quite frankly, it's boring. Google is testing new versions of interfaces for both the Rate & Review and Content Filters screens in the Play Store. Neither one appears to be significantly different, so I expect this has more to do with code clean-up than anything; but it's possible that we'll see changes in behavior some time in the future. The only possibly distinct change is that the new Rate & Review screen looks like it will be presented as a full-screen display rather than a pop-up dialog.

We've all done it. We see an announcement about a great new game only to find out it won't be released for a month. By the time it comes out, we've completely forgotten about it. For things like books and movies, this isn't a problem because we can pre-order these things and they'll magically show up on our devices within minutes of release. Wouldn't it be great if we could do that with apps, too? Well, that's about to happen.

A healthy set of new strings in the Play Store apk spells out just what we can look forward to. There won't be pre-orders quite like books, music, or movies. Instead, customers will be able to "pre-register" for apps, which is sort of like opting in. When a developer flips the switch, these customers will receive a notification letting them know the app is available and ready for immediate installation. The process is a little less streamlined than pre-ordering, but that's necessary because apps –unlike other types of content– require more decisions about which devices they should be installed on.

It's a pretty simple system that's really just about keeping customers involved after an initial announcement. It's not clear if this will be available to all developers, or just select partners. Major game studios will be the most obvious beneficiaries. The details will mostly involve business decisions on Google's side, but at least we know it's coming.

I had a busy weekend and Google beat me to breaking the big news about Bundles and Extras. At least, I think that was the biggest news out of this Teardown. Still, there are some good things to look forward to like high-quality reviews for movies and pre-registration for apps. I also have high hopes for Extras because they could really give Play Movies a distinctive edge over competing streaming services and may push all services to offer more content. Now that we've seen new things happening for Movies, I'm optimistic about whatever Books and Music may bring next.

YouTube Is Getting Ready To Offer An Ad-Free Subscription Option