We don't get to talk about FLIR much on an Android blog, but that Seek thermal camera was neat, right? Now FLIR is releasing another consumer-level imaging solution, but this time it's taking on the home surveillance market with the FLIR FX. This $199 camera has all the bells and whistles of the competition, and then some.

The similarly priced Dropcam is probably the most well-known competition for FLIR, but the FX seems to have a few advantages. For one, it can record to a microSD card if you don't want to deal with the cloud or subscriptions. FLIR has also created a feature called RapidRecap that lets you review hours of footage in a minute by speeding up and overlaying frames. A rechargable battery keeps it running for up to two hours when unplugged as well. FLIR FX has night vision that works up to 65 feet away (Dropcam does have this in the Pro and HD models), and smart zones can record and alert you only when movement is detected there. The FLIX FX connects to your home network and uploads data to the FLIR online storage service. You can access video streams (only one live stream at a time) and review past footage from the new FLIR FX app, which looks quite cool at first glance. The camera offers free access to the basic FLIR online service with 48 hours of video cache, but you can pat $10-20 per month for more storage and features. Again, you can just use a microSD card if you don't want the online stuff. 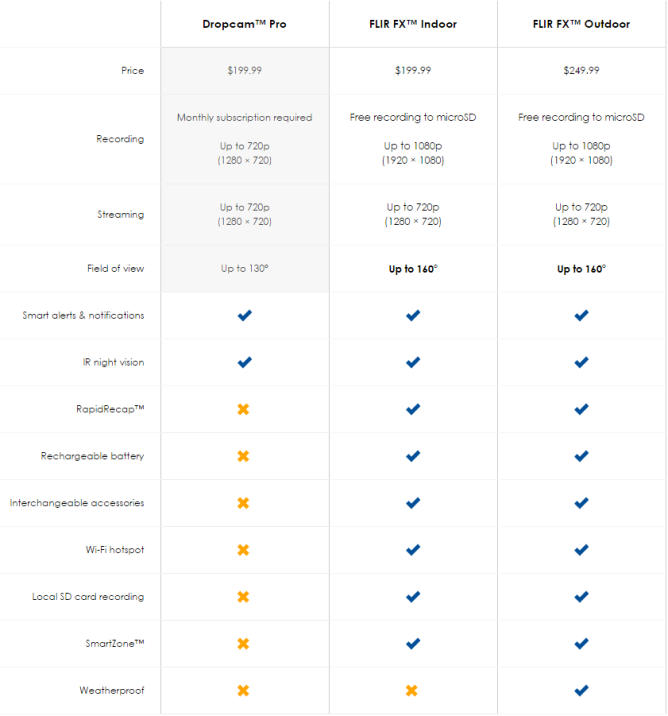 The $199 camera is just the unit itself and a stand suitable for indoor use. The $249.99 kit includes a weatherproof enclosure, which can also be purchased separately for $70. Then there's the $60 sport case and a $50 car mount. You can pre-order now and they ship on or around the 15th. New Budget Huawei Device For US Pops Up On Amazon, Looks Like A $180 Moto G Competitor With LTE

Slacker Radio's Android App Gets A Big Redesign In The Latest Update... And Ringback Tones