I knew the Indiegogo origin story of Misfit — which translated into skepticism in my mind —  and I'd read about its Shine tracker and simpler/cheaper Flash version, but I wasn't completely convinced by the quality nor the premise of the brand. That changed after a short hands-on at CES, and I walked away impressed and ready to recommend both products to my friends and family for more than one reason. 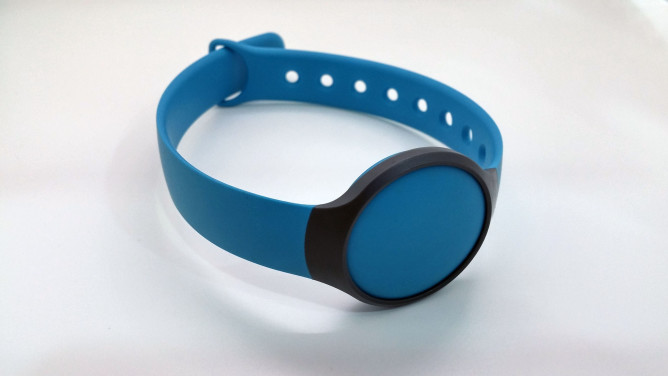 I ended up getting a Misfit Flash for my aunt and trying it for a week before giving it to her (to be familiar with the device and app in case I had to remotely help her). The week that I spent with the Flash cemented my choice and recommendation: Misfit is a great pick for those who like the idea of activity tracking but don't want to be very involved in the process. It's a lower maintenance device and platform than the Fitbit, it provides more data than the Pebble, runs leaps around any Android Wear watch (for activity tracking), and requires significantly less hassle than the Amiigo.

I'll explain the reasoning behind this claim and provide some sometimes anecdotal, other times very subjective comparisons with the other trackers that I have personally tried. Notably absent from the list is Jawbone, because I haven't had my hands on one yet — I plan to check the UP3 whenever the company finally releases it. Misfit's trackers use a coin-shaped CR2032 battery. Because there's no screen and the tracker connects over BLE to your phone, this small 225mAh battery can last quite a while. Precisely how much? 4 to 6 months. If you want to recommend a gadget to someone who doesn't want to be bothered with charging it (or who is likely to forget doing that), 4 to 6 months of battery life is a cool number to build your argument on. The downside is that it's not rechargeable, but whenever they see the "low battery" warning, they will have several days to get a new CR2032 and swap it out.

One of my first world problems with my Fitbit is that I have to let it know every day the time I go to bed and wake up; I almost never remember to manually start and end my sleep sessions. But given that I can post-log sleep, I usually enter the data every week or so, trying to recall as accurately as possible my sleeping schedule for each day. When I had a Pebble for a few months, I installed the Pebble Misfit app and was floored to see it track my sleep automatically. Okay, so you stopped moving at around 11pm, you started moving again around 7am, and you flipped a bit intermittently. I'll log that as your sleep and you do nothing, Darling. Perfect. 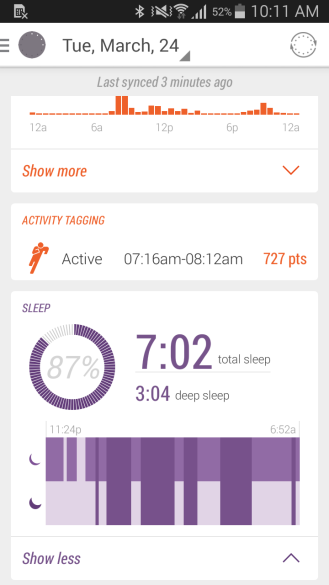 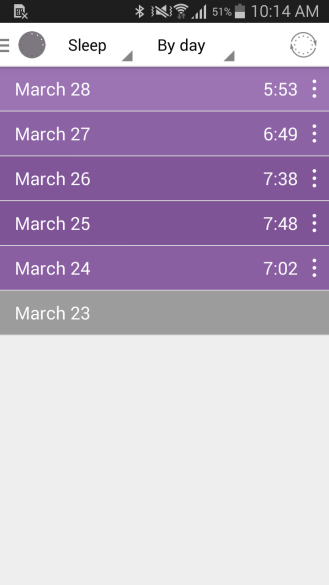 The regular Misfit does the same thing. It isn't as precisely accurate as manually starting and ending sleep sessions (for example, you may be awake but lying still and it wouldn't know that), but given that it's reliably doing it every night without you having to guess or remember your schedule a few days later, or be bothered by manually launching and ending the sleep mode, it's infinitely better.

After all, if you want an exact and detailed sleep tracker, you're better off with something mattress-based like Beddit — wearable trackers, no matter the brand, will only give you a general idea of your sleep quality and some stats over time.

Activity trackers are usually good at logging your steps all day long, but if you go for a run or walk, they will bundle that data with the rest of your day without any differentiation. One of Misfit's features that surprised me while I was using it was its ability to automatically recognize a more intense activity and distinguish it from your daily steps. That doesn't change anything to your total steps, but it impacts your points and calories. 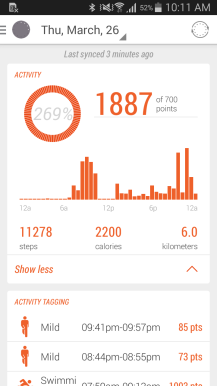 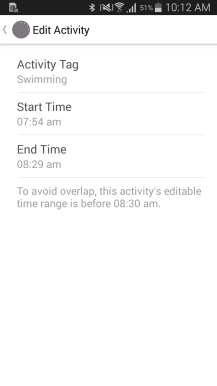 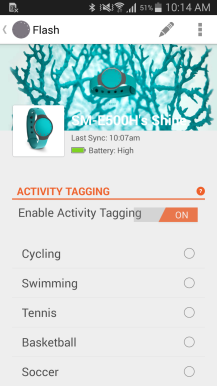 The activity appears in your app along with its duration and the option to edit it. By default, activities are tagged as walks and runs, but you can change them to cycling, swimming, tennis, basketball, or soccer. Each one earns you different points and burns calories based on how long it lasted and how vigorous it was.

Other Features In Favor Of Simplicity

While the previous 3 features already explain why I feel that Misfit is one of the least involved activity trackers currently available, there are even more reasons why the platform and its corresponding devices are interesting. For starters, it uses a point system instead of focusing on calories or steps. Points are easier to understand than calories, trackable over time, and all activities count toward your total instead of the tracker being focused on step-based activities like walking and running exclusively. 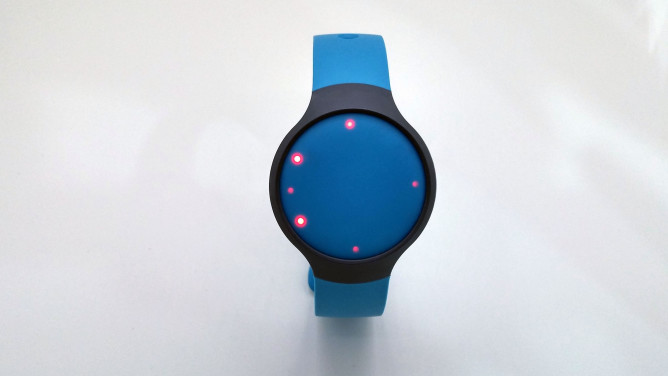 It's 10:40. Takes a few minutes to become familiar with the display.

And if you want a less involved tracker, then it should be waterproof so you don't have to worry about it all the time. That's the case with Misfit's devices — they are waterproof up to 50m (Shine) and 30m (Flash). You can wear them while you're showering, swimming in a pool or in open water, doing the dishes, and so on. They even double as a watch, which is handy if you're not wearing one in the shower or pool. Most other trackers are either only splashproof or waterproof for only 30 minutes, which is OK for a shower but not long enough for a swim. 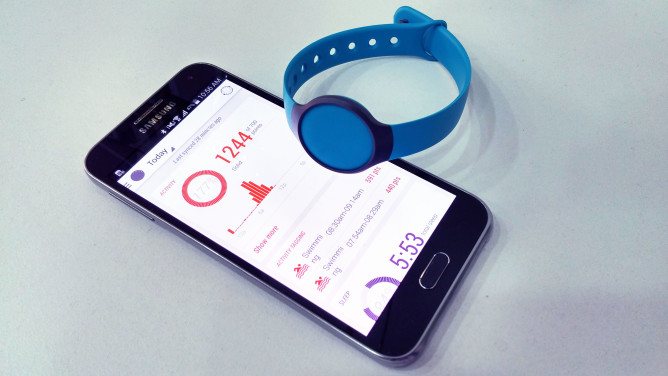 And the Misfit app is simple to understand and use. Data is presented clearly, previous stats are accessible through the history, there are no overbearing settings, and it connects with other health platforms like MyFitnessPal, RunKeeper, Lose It!, and more. And Then The Compromises

When you're aiming for an effortless device and platform, you are bound to leave some features behind. That's the case with Misfit. It obviously doesn't double as a smartwatch like Android Wear devices and Pebble, nor does it work as an alarm or notify you when you've been sedentary for a while.

There is no weight, water, or food logging (the Misfit iOS app has those options though), and the social element is lacking as well. (I'm a big fan of Fitbit's challenges.) Data detail is not as extensive as what you see with the Amiigo — not even in the same ballpark. Currently, the Misfit app doesn't even automatically sync on Android, so you have to manually go in and hit the sync button every day or couple of days to see your progress.

And while the Misfit Flash that I tried was very lightweight and low-profile, I found that advantageous in some instances (while sleeping or swimming), but inconvenient at others. When I was wearing long sleeves, they would cover the band and I couldn't tell if the Misfit was on my wrist or not unless I felt it up. This makes it a lot easier to lose the tracker without noticing, especially when the design makes it prone to popping out when it isn't tightly wrapped around your wrist.

These sacrifices had to be made to keep Misfit simple and effortless. The device and the platform are obviously more suited for the average smartphone user who wants to get a gross idea of their activity level but doesn't want to fuss around with the tracker every few hours and try to remember to charge it, manually log everything, and on top of that remove it when showering or swimming.

However, while I see the advantage of the brand, Misfit doesn't satisfy my thirst for stats and detailed tracking. I'll stick to my Fitbit One for daily tracking (I have 2 years worth of data history and dozens of friends to challenge there), Amiigo for precise exercise data (it's the best BLE Android-connected swim tracker I have tried to date), and my G Watch R for its smartwatch features (I don't care about its step counting and wish I could disable it to possibly extend battery life). Too many? Maybe. I do look forward to the day when I can consolidate them in one device that provides everything I need. 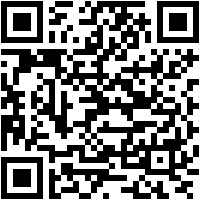