Have you ever looked at your low-tech car audio system and wished your head unit could just be as smart as the phone in your pocket? Or maybe you have one of those fancy infotainment systems whose software tends to make the HTC G1 look futuristic by comparison. Well, an automaker finally decided to acknowledge that it's easier to use the hardware that the customer already has than build something newer and more expensive that won't do any better. Which manufacturer decided to do it? It's the same people who brought you this:

Yep, smart, of smart car fame and subsidiary of Daimler AG, the group behind Mercedes-Benz. For a vehicle in which space and cost savings are crucial, using your phone as your head unit makes perfect sense. Smart also tends to market to a younger market segment for whom this kind of unconventional thinking won't be too jarring. The typical 25-year-old won't be lamenting the loss of a physical disc drive or anything like that.

The phone dock will be shipping on some trims of the redesigned 2016 smart fortwo, the only smart model you will normally see in the United States and many other markets. Maybe this is the justification you needed to spring for a giant phone like the Nexus 6; it'll be easier to see while you drive!

Thanks to the smart crossConnect app, the dock is more than just a slightly nicer version of the same physical docks you could stick in any old car. The app gives access to the car in such a way that it even provides a score of your driving, based on things like how often you follow the posted speed limit and the amount of G-Force generated when you turn. You also get turn-by-turn directions, lots of voice commands, and the ability to control the built-in radio. 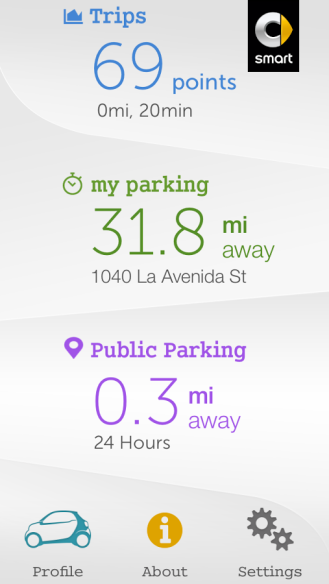 Of course, I started off this article by railing on the poor software development typical of automakers. It appears that smart may be no exception, as the Android app has generally low reviews (and even worse in Apple land). More obviously disappointing is that they only promise that it will work on the Samsung Galaxy S4 and S5:

Please play attention to the fact that the app is only supported von Samsung Galaxy S4 and S5 devices. On other devices it can not be guaranteed that the app will work correctly and all information is displayed completely.

All funny typos are in the original app description. While that seems to leave open the possibility of it working on other devices, we couldn't find any others that the Play Store showed as compatible.

So smart hasn't knocked this one completely out of the park just yet, but the 2016 fortwo hasn't hit the market. There's still time! And either way, this is still a great idea. Even if their software doesn't pan out, you get a nifty dock that you can use to mount your phone and stream audio via Bluetooth through the car stereo system. That's what a lot of us have wanted for a long time.