Do you use Taptu to read news and entertainment stories? Statistically speaking, the answer is no - we haven't even written a single story on the aggregator in over four years. Taptu is, or more accurately was, a sort of curated platform that pulled news and other stories from both a user's own social networks and a series of pre-made topical feeds. According to messages being sent to users of the app, the entire service will shut down tomorrow, March 31st. 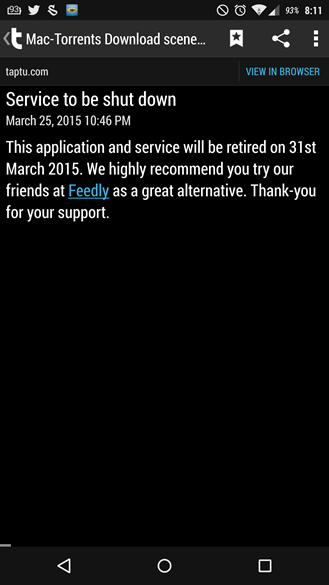 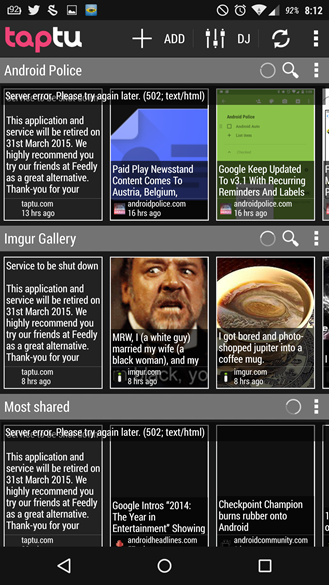 The Play Store and iOS App Store pages for Taptu's mobile apps are now empty, though you may be able to access the Play Store's if you've installed Taptu previously. According to a screenshot sent in by an Android Police reader, the creators are recommending that users switch to Feedly. The RSS aggregator has become the de facto standard after Google abandoned its Reader service, and the various web and mobile apps that use its open API have more or less filled the gap in its absence. Feedly offers a combination of pre-populated feeds and manually-synced RSS, but does not draw stories directly from social networks.

At least one current user is already seeing numerous fetching errors in the app. If you've got a particularly good setup for news feeds, feel free to share it with your fellow readers in the comments section. I use Feedly on the desktop and Reader+ on Android, because the official Feedly app still doesn't have a decent scrolling widget.