Humans cannot see infrared light, but some creatures can (like snakes, beetles, and the Predator). If you want to be more like the Predator, there's always the Seek Thermal Camera, which is a fun little gadget that plugs into the USB port on your phone or tablet to give it real time thermal vision. It's usually $249, but now it's down to just $189.54 on Amazon. 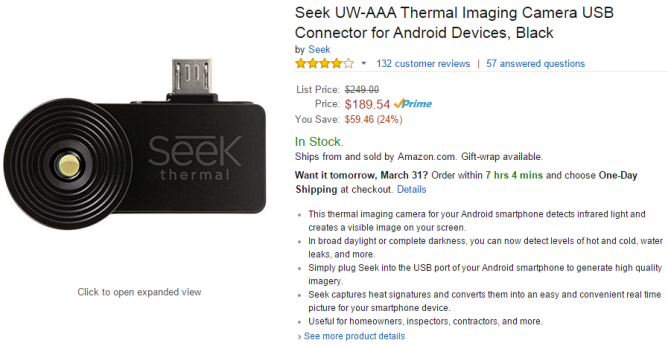 Infrared radiation sits below visible light on the electromagnetic spectrum and can be used to detect objects emitting heat. The resolution of this camera isn't great, but you can identify objects in the dark about 150 feet away with the Seek camera. It picks up faint heat signatures as far as 1000 feet away.

Seek originally announced this device at $199, which is what we have listed in the original review. The price has since gone up to $249 because of reasons, I suppose. Still, $189 is a solid discount.