A GFXBench result for a device codenamed F500x, AKA the G4, appeared recently with an interesting specification sheet attached - one that did not include a Snapdragon 810. Here's the benchmark. 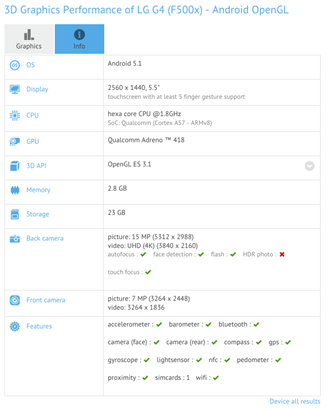 We know this is a Snapdragon 808 because it's a hexa-core CPU with an Adreno 418, a combination only found on the yet-to-be-released SoC. The reason we're posting this benchmark, though, is because this isn't the first time we've heard the G4 will use an 808. While the information is a bit old, we've heard from a reliable source that LG is strongly considering shipping the G4 with the 808, though with the caveat that 810 was also still being considered. It's also possible LG will split up the chipsets by market, with some getting 810 and others getting 808, though we simply don't know.

Given that Snapdragon 810 has only taken more flak in the press and community since HTC's One M9 launched at MWC, the notion that LG may choose to forego the controversial silicon in favor of a more conservative, less power-hungry chip isn't unreasonable. With no other real viable alternative to Qualcomm in the high-end LTE space, partners really do only have one option if they want to skip 810: go down to the next drawer in the parts bin. With 815 still not announced and 820 still far off on the horizon, the 808 is the only real viable alternative (Qualcomm may not even be taking new orders for 805 anymore) for the time being.

We'll see what happens when the G4 launches.

Moto X 2014 Now Available In Red Leather, So Your Phone Can Match Your Christian Louboutin Pumps