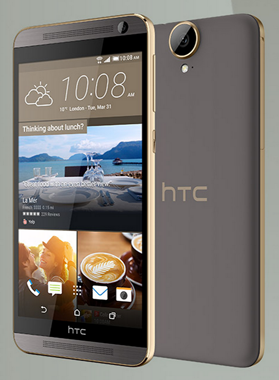 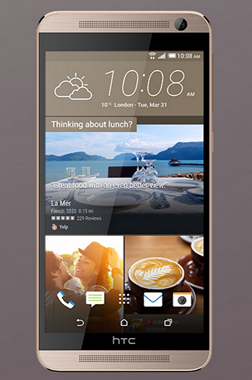 The E9+ is a "phablet," at least broadly, thanks to its 5.5" 2560x1440 LCD screen. The phone looks like a One M9 that's taken a few steps down-market: while it's still trimmed with metal, the back panel is plastic. It will be available in grey with gold trim, white with gold trim, and black with silver trim. Inside is a MediaTek 8-core processor running at 2GHz paired to 3GB of RAM, 16GB of storage plus whatever you can shove in a MicroSD card slot, and a surprisingly small (considering the screen size) 2800mAh battery. Maybe the 7.49mm profile has something to do with that. Even so, the phone uses a dual-SIM setup with LTE, a popular addition in Asian markets. The camera is a generous 20 megapixels, with the HTC "Ultrapixel" camera pulling duty on the front, like the One M9.

According to Engadget, the regular One E9 has slightly lower specs than the E9+, including a 1080p screen, 2GB of RAM, and a 13MP rear camera. Upleaks allegedly has several press shots of the low-end option (below). There are no dates or prices for either device.