We're getting a few reports that some T-Mobile customers who preordered the Galaxy S6 and its edgier brother are already receiving their phones. When they turn them on, they might just be greeted by an over-the-air update right away. The new builds are actually dated March 22nd, so it's probable that every S6 and S6 Edge in T-Mobile's initial batch will need this update. The build is Android 5.0.2, labeled G920TUVU1AOCG and G925TUVU1AOCG for the S6 and S6 Edge, respectively. 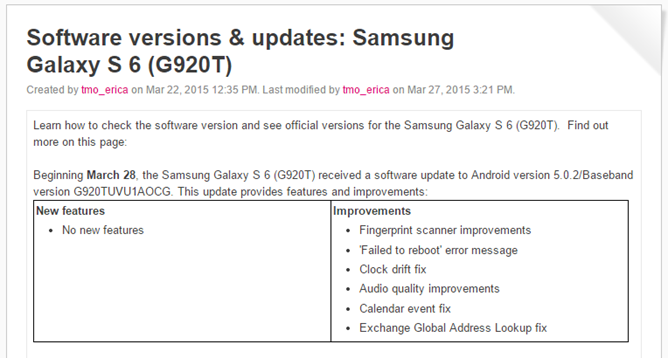 There aren't any new features in either update, just a handful of fixes from Samsung:

Given T-Mobile's usual staged rollout, it may take several days or even a week or so for the OTA to get to your phone. I'd recommend waiting to take the update before flashing a custom recovery and/or rooting - after Lollipop 5.0, stock firmware can't be upgraded if there are any system-level modifications to a device's software. The update is 178.67MB (small for Samsung) and T-Mobile won't let you begin the download unless you're on a Wi-Fi network.