The Nexus 6 is big and fast and sharp, but my favorite feature is probably its Quick Charge capacity, which lets it charge up in a fraction of the time it takes older phones. The only problem is that this feature requires special charging adapters: one of them comes in the box, but the rest of the time you're stuck with the old charging rate. If you're in the market for an extra Quick Charge adapter, and you wouldn't mind charging a bunch of other stuff at the same time, check out this deal on the US version of Amazon.

The CHOE Adaptive Fast Charger Turbo Charger with Qualcomm Technology (breathe) is a pretty standard multi-charge adapter, but two of its six USB ports can charge phones or tablets that use Qualcomm's Quick Charge tech simultaneously. (It might also be able to charge similar, competing quick-charging standards, but Qualcomm is what it's rated for.) The gadget is normally $35, which isn't bad in the first place, but a Slickdeals forum poster found an Amazon coupon that lowers the price to $24.99. That's just $4.16 a port! 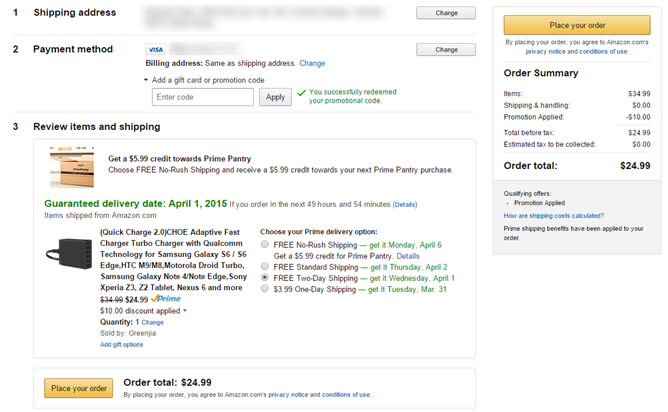 Enter "CE7GDJNY" during the Amazon checkout process to get ten bucks off. The coupon is reportedly valid until May 31st. With or without the discount, Amazon Prime subscribers get free two-day shipping, and the deal qualifies for Super Saver shipping even if you don't use Prime.

[Shocker] Even After Launching The Nexus 6, Verizon Still Won't Officially Activate One That ...