The Galaxy Tab S 10.5 is one of the best all-around tablets on the market right now, if you don't mind a steep asking price and Samsung's rather heavy-handed software. The tablet launched with Android KitKat, but now it's getting an update to Android 5.0.2! ...just in time for owners to be miffed that they're not getting the bleeding-edge 5.1 release. Oh well, if wishes were horses we'd all be eating steak. 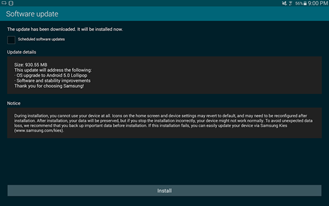 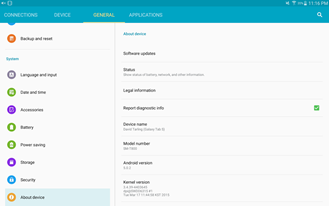 Android Police reader David Tarling sent us the above screenshot showing the rollout to his Wi-Fi Tab S 10.5 in the United States. SamMobile's ever-increasing repository of Samsung firmware is also hosting builds for the US Wi-Fi version (under "Cellular south," for some reason, but the download page is labeled for Wi-Fi), the Canadian Wi-Fi version, and the French Wi-Fi version. All of them should be easily flashable via Samsung Kies, so long as you haven't made any major modifications to your tablet's software.

The equally excellent and smaller Galaxy Tab S 8.4 doesn't seem to be getting any Lollipop love at the moment, and neither do the various LTE models of the 10.5 or those in other countries. If you're seeing the 5.0.2 build in your notification bar, let your fellow readers know (and provide your location, if you don't mind) down there in the comments section.

RunKeeper Gets A Spiffy Material Design UI Refresh In Version 5.3.3

Cyanogen Inc. Ramps Up The Rhetoric To Maximum Crazy, Will Partner With Blu To Launch A Phone ...