Remember back in the days of "dumb" phones when everyone wanted them to be as tiny as possible? Then the original RAZR hit, and it was all about thinness, even to the point of absurdity? That second trend is still going strong, but a contender for the next one is phones (and laptops and TVs and what have you) with the least amount of screen bezel possible. Behold, a new Oppo phone that gives the oddball Sharp Aquos Crystal a run for its money, at least on the left and right sides. 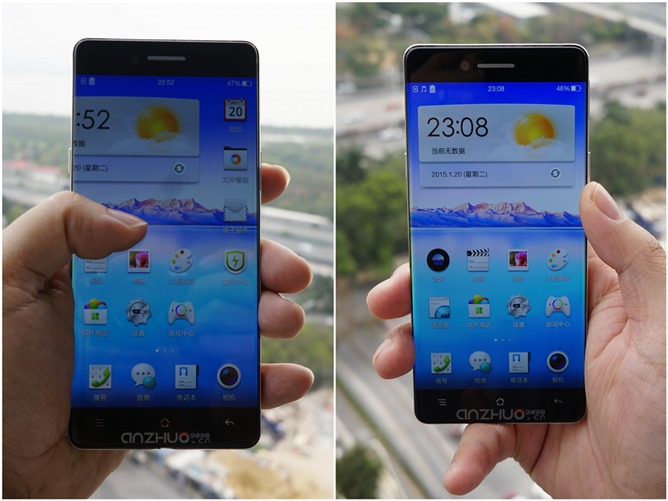 Originally posted to Chinese site Anzhuo, this as-yet unnamed phone uses curved glass on the very edge of the screen to make the already-thin bezels look almost invisible (as seen in this patent). The screen is allegedly 5.5 inches and it's using Oppo's ColorOS Android skin. Other than that, there are no specifications mentioned. It's a striking look, to be certain, but the utility is questionable - after all, the phone still has to have a sizeable space above and below the screen for an earpiece, front-facing camera, and (in this case at least) hardware navigation buttons. Sharp got around this by cramming everything into the bottom portion of the phone, giving the Aquos Crystal an ultra-thin bezel on three sides. The Oppo phone goes with a more conventional layout.

It's hard to see the point of this beyond the "wow" factor - extremely thin bezels might even hinder user interactions thanks to false touches on either side while you're holding the phone. You can see that the person holding the phone in the photos is actually touching the screen with his or her palm, and those hands don't look particularly big or fleshy. (That can be alleviated with extra software, a common addition for laptop trackpads, but that's hardly a perfect solution.) Look for an official announcement soon; the quality of the photos and video make this seem like it could be an intentional leak.

AT&T's Galaxy Note 4 Is Getting The Android 5.0 Lollipop Update