Cricket. Cricket. That's the one like baseball, but with the flat bats and a circular field and a ton of players and black tea afterwards, right? I apologize - as an American it's hard for me to concentrate on sports that don't involve constant concussions and commercial breaks every two minutes. But I am reliably informed that Cricket is enjoyed in Britain and all the places that used to be Britain (except this one). For all of those people, the International Cricket Council has teamed up with the UK arm of Indian publisher Reliance Big Entertainment to offer an official World Cup fantasy app. 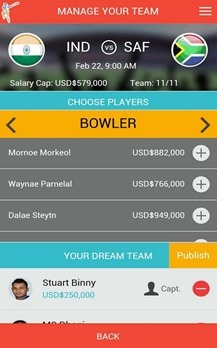 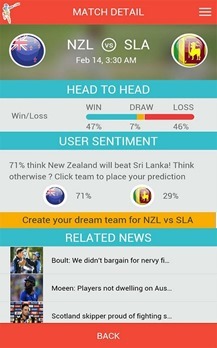 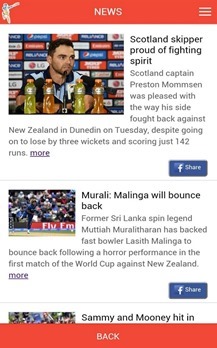 Fantasy sports are pretty much identical no matter what the game you're pretending to play: pick players from a draft to make your fantasy team, then pit it against other fantasy teams in either a limited league or a worldwide pool. You'll have to select players to fill specific positions (whatever the Cricket equivalent of pitcher, batter, and... all the other ones are), balancing your desire to fill a roster with all-stars with a limited budget of fantasy money. Unlike some other fantasy leagues, there's no charge to play - this is essentially a promotional app just for the World Cup.

The rest of the app is devoted to a World Cup schedule, news, player profiles and stats, and live scores and alerts. That's actually much more handy for this kind of event than a standard sports app, since people from all over the world (and different time zones) are trying to keep up with their home team as they square off in Australia and New Zealand.