Borderlands is a super-popular series of intense, multiplayer-focused first-person shooter games. So it's odd, very odd, that the most exciting thing to happen to the series since the original game came out in 2009... is a single-player, offline, point-and-click adventure title. That's right, TellTale's Tales From The Borderlands adventure series is awesome, and its stand-alone story is more engaging than pretty much all of Gearbox's existing sci-fi lore combined. In my opinion, of course. Episode 2 is available on Android today.

Trailer for the console version - the Android release is mostly the same, but not quite as slick-looking.

The first episode in TellTale's series has been out on Android since December, just a few weeks after it debuted on PCs and consoles. Episode 2, titled "Atlas Mugged," was released for those systems just two days ago, so TellTale is really stepping up its mobile release schedule. The second episode follows the continuing adventures of Hyperion corporation middle-manager Rhys and savvy con woman Fiona as they hunt down a loot-filled Vault while trying not to kill each other. None of the main characters from Tales of the Borderlands are the hyper-powered psychopaths you play in the full Borderlands games (though said gun-totting nutjobs make cameo appearances), so wit, skill, and thinking are much more valuable to the player than twitchy reflexes. 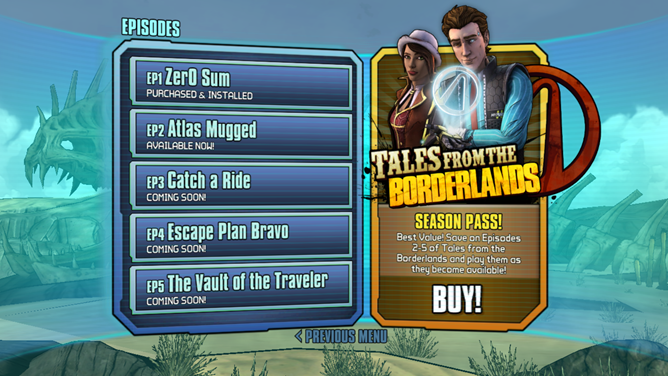 The Android version of Tales from the Borderlands costs $5 and includes the first episode, with each additional episode costing another $5. You can save a little dough with the season pass, which gets you episodes 2-5 for $15. Be aware that TellTale's Android games tend to be extremely taxing, so you'll want a high-powered device to run the game reliably. I'd recommend a Snapdragon 800/Tegra 4 or better.