Ever since Google began releasing Android 5.1 OTAs last week, there has been a bit of confusion over build numbers. The first build to get released was LMY47D, which went out to international variants as well as US models with Sprint SIM cards. The next build to surface was LMY47E, which appears to be shipping on new devices sold by Verizon, who just launched Google's flagship in stores today. It now seems that T-Mobile USA is getting its own unique build, LYM47M. 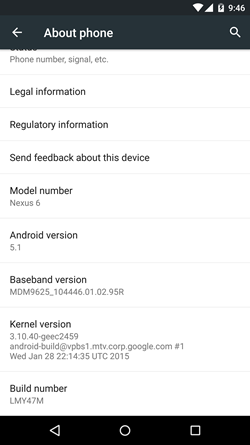 Of particularly interesting note here is that LMY47M still uses radio version 01.02.95, which is the same one that appeared with the original LMY47D build. Verizon's LMY47E build has a newer radio, version 01.02.98. So far, it's unclear as to whether or not US carriers will start getting their own unique firmware builds for the Nexus 6, or if this is just a one-time thing that will result in all builds being merged into one with the next OTA, whenever that happens. Regardless, this is making the Android 5.1 rollout interesting, to say the least.