You knew it was coming. With the Moto 360 being easily the most exciting Android Wear device from the initial video almost exactly a year ago, and then being something of a disappointment upon release thanks to its ancient chipset and not-really-360-degree "round" screen, a follow-up was inevitable. It looks like an executive from Lenovo (the new owners of Motorola Mobility) may have let the cat out of the bag on the company's next Android Wear smartwatch. 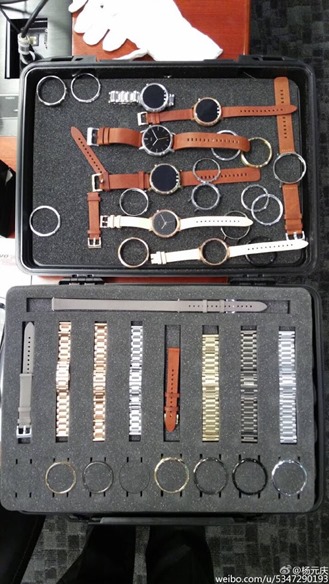 Chinese Facebook community HelloMotoHK posted the image above last night, claiming that it was a photo taken by Lenovo's CEO Yang Yuanqing. It shows a padded case containing a series of fully and partially-assembled watches that greatly resemble the Moto 360, along with loose bodies, screens and digitizers, and a variety of straps in leather and metal. In fact you could confuse the photo with a bunch of loose parts for the original Moto 360, except for one tiny detail: the lugs.

Lugs are the part of the watch that connects to the springbar and holds the strap in place. The current Moto 360 uses hidden lugs integrated with the main body of the watch, tucked underneath the case and dial for a "modern" look. Most conventional watches, and in fact most of the competing Android Wear watches available, use an exposed lug design with the arms extending outside of the body of the watch. The watches in the case above clearly use an exposed lug design in addition to a body that looks like the original 360 - check out the clear cutouts on the bottom part of the image. That's good news for fans of replacement straps, as the cramped design of the current model makes it incompatible with many thicker straps. 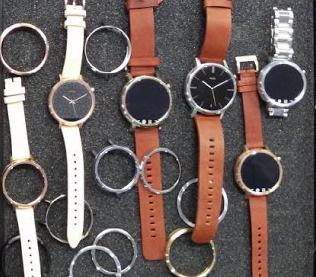 What's less appealing is the presence of the "flat tire" cutout. Five of the watches in the photo include the screen component, and it looks like all of them still use the cutout, even with the new lug-equipped watch body. It's possible that this means the next iteration of the Moto 360 will retain its distinctive (and derided) shape, or it could simply mean that the prototypes seen here are still using the old screens. It's too early to tell. There's also no way to know if new models are still using the relatively underpowered and inefficient Texas Instruments chipsets from the original Moto 360.

The photo and the source can't be verified, so consider all of this rumor until something more concrete pops up.