Google has a well-earned reputation for funding multiple redundant and competing products, then unceremoniously eviscerating the ones that don't quite fit the company's vision. <cough>messaging clients, Currents, and that other one</cough>. Now, it looks like the selection of document editors is also about to undergo such a diet. Google is finally getting ready to pull the plug on Quickoffice. An update to the app now warns users that support has ended, and that it has been replaced by Docs, Sheets, and Slides.

Last summer, Google announced that development on Quickoffice had come to an end because all of its pertinent features had been integrated into the suite of Drive apps. The plan called for unpublishing Quickoffice from the Play Store "in the coming weeks." The app continued to work for those that had it installed, but was not intended to receive further updates. To Google's word, the app was partially delisted – it now only shows up for users who had previously downloaded it, but new users couldn't see or download it. That was 9 months ago. Aside from a small bug fix that rolled out to users in November, the app was presumed to be completely abandoned.

Yesterday, a surprise update turned up for Quickoffice alongside fresh releases of Docs, Slides, and Sheets. The new version looks the same, but it is now configured to create new documents using the individual editors if they are installed. If any one of those is missing, a message is posted to the main screen to let users know that Quickoffice is no longer supported and the newer independent editors have replaced it. 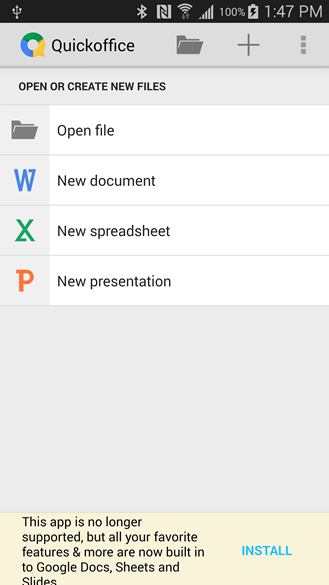 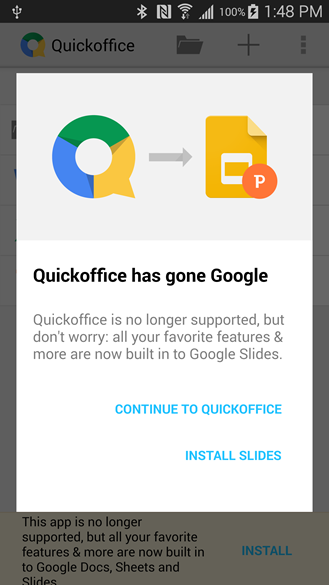 Tapping on a document type will prompt users to download the corresponding editor from the Play Store, but there is also an option to continue on to Quickoffice. Strictly speaking, everything is still fully operational, but it's no longer possible to use both Quickoffice and a newer editor on the same device.

There's no statement accompanying this release, but it appears Google is determined to push any remaining users off of the abandoned app. Since there hasn't been a meaningful update in nearly 18 months, it's long passed the point where most users should have moved on. While Quickoffice continues to be fully functional, users should prepare themselves for an eventual change to the Drive API that breaks compatibility. Once that time comes, Google will probably send out a final update that turns the app into a shell, not unlike the Currents app.

If you never got to try Quickoffice but want to see what the fuss is about, or you're just seeking a little nostalgia, there are a few versions available on APK Mirror.

Alternate Title: Google Places Quickoffice Under The Guillotine, Asks If There Are Any Final Words.