A variety of users have begun reporting problems with setting reminders using voice controls in the Google Search app, with the end result being an alarm rather than a reminder. This does not occur when entering the same command with the keyboard, so it would seem to be a server-side issue. Either way, you will want to look out for this bug if you tend to use voice commands for this purpose, because you may be in for a rude awakening - literally. 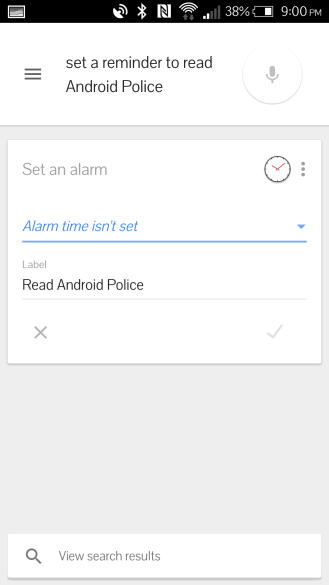 Note: obviously a test. Nobody would ever need a reminder to read AP.

This problem holds up with different wording as well. For example, "remind me," "set a reminder," "make a reminder," and "create a reminder" produce the same result.

Reports on Google Groups indicate this issue showing up in countless configurations: Android 4.4.x, 5.0.x, and 5.1 along with Google Search v4.1.x, v4.2.x, and 4.3.x. There are no clear patterns in terms of the devices affected either. I personally tested two devices on 4.4.2 and 5.0.2, respectively, and the last three versions of the Google Search app (v4.1.-v4.3). All signs point to this being an issue that resides on Google's servers, where voice commands are processed.

The other indicator that this is likely server side is that typing in the command works fine, even with the same text. 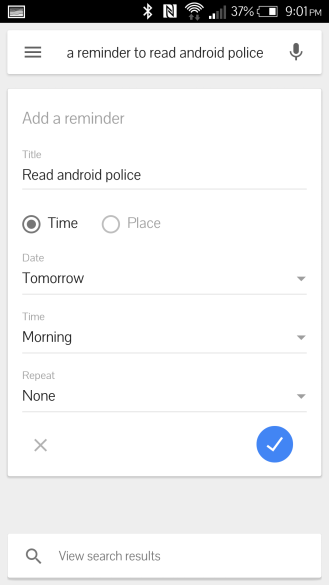 Another wrinkle is when you try to add more parameters to the command, such as specific dates. In this case, you may be prompted to add an event to your calendar instead. Some have reported this, but I have not been able to replicate it in any of my attempts.

A Googler has responded to users on Google Groups reporting the issue:

Thanks for all of your feedback. The team is currently aware of this issue, and we are working to find a solution. I'll post more when I have an update.

In the meantime, you can still create reminders by going to the Menu icon in the top left corner of the Home screen (Android) or by typing 'remind me to' in your search box (Android or iOS).  If you'd like to do this, check out the Help Center article here.

Thanks for your patience.

We'll keep an eye on things to see when this gets fixed. At this point, it does not appear that users can make any changes to restore this function to the way it used to work. You will just have to sit tight. In the meantime, as indicated, you can set reminders manually by typing in the same text that you would normally dictate.

Google appears to have rolled out a fix to this on the back end. Reminders are working again.

Sunshine 3.0 Released With Ability To Unlock And S-Off Many Motorola And Almost All HTC Handsets