We've heard it a handful of times before, but here we are again: some OEM is announcing that it's experimenting with a dual-boot Windows / Android project, or in this case, a project that will allow users to switch their handset from an Android phone to a Windows phone with a simple tool. Microsoft has teamed up with Xiaomi to test this concept on the Mi 4, but mostly as a way to get market feedback on Windows 10 for smartphones in China.

Microsoft's language makes it pretty clear this is just a one-off experiment.

Microsoft will partner with Xiaomi to offer Windows 10 free downloads to a select group of Xiaomi Mi4 users. Xiaomi Mi4 users will get the ability to flash their phones with the new Windows 10 OS and provide feedback to Xiaomi and Microsoft on their experience. This partnership will allow Xiaomi and Microsoft to get direct user feedback and continue to improve the experience for China.

Windows has non-existent smartphone penetration in China, and so doing market research is important. What better way to get feedback, then, than to allow some eager power users of a popular smartphone to flash a new OS to the device? It's actually a pretty cool concept, and I'm sure there would be plenty of curious people out there willing to give it a whirl.

Xiaomi is tempering this story even further, having told several outlets that the program is not a partnership, but merely something for power users to explore if they want to. 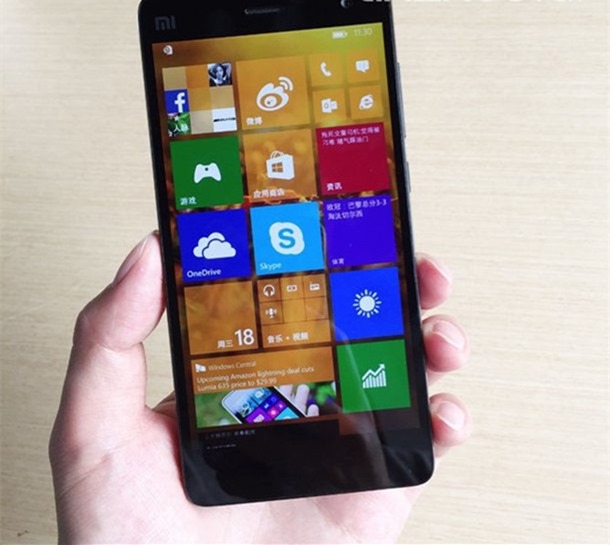 So, this is predictably ramping up speculation that eventually there's going to be some kind of phone out there that lets you "choose your own OS flavor" out of the box, and that you'll open up your shiny new screen-brick and tap "Windows" or "Android." This makes for an extremely compelling, fanboy-instigating narrative that the tech world really, really loves to hear. It's fun gossip. And with Xiaomi being probably the most well-recognized major Chinese smartphone brand in the western tech media, everyone is bound to talk it up, because "implications" and "strategic maneuvering." Google and Microsoft are sort of like Ford and GM, except if GM had actually gone fully bankrupt and then started from scratch and ran mean-spirited "Found On Road Dead (F.O.R.D.)" commercials while still having market share and relevance on par with Saab.

Anyway, even if Microsoft develops this "tool" to allow consumers to re-flash their Android devices to Windows phone, the chance of that ever achieving anything resembling popularity is basically nil. The reasons for that are simple: first, most devices are sold with locked bootloaders at the request of operators, or by default by device OEM. Second, more importantly: OEMs have no real incentive to cooperate. What does Samsung gain by investing tons of time to make sure its phones can be flashed to Windows 10 (all while developing a way to do this without compromising device security - no small task)? Something to advertise? There's no gain here, because there is no demand for Windows phones, and if there was, Samsung would probably just... build a Windows phone.

If being able to re-flash your OS to Windows was that popular, why wouldn't manufacturers just make Windows phones? It makes no sense. Also, can you imagine Microsoft allowing Google to release a tool that re-flashed Windows phones to Android ? They'd threaten to nuke licensing deals with anyone who tried it immediately. Let's not fool ourselves here.

As to the dual-boot option, well, no. It's never going to happen, not as long as Google controls the Open Handset Alliance. One of the Open Handset Alliance's stipulations is that members of the alliance cannot ship "incompatible" versions of Android. This, ostensibly, also includes dual-boot devices, which Google has made clear through the non-launch of every major product that wanted this feature. Compatibility with Android means a device is running "all-Android" out of the box.

Products that did launch advertising "dual-boot" functionality like Geeksphone's Android/Firefox Revolution weren't actually dual-boot, they simply could have the OS re-flashed. They would ship with Android, and a utility would allow the user, in the case of the Revolution, to then flash Firefox OS and replace Android. Actual dual-boot functionality did not exist.

Based on the significant evidence we've seen to date, it seems rather obvious that Google is not allowing its Android partners to ship any kind of dual-boot solution on their smartphones, tablets, or anything else.

... And Xiaomi is a Google partner. Hugo Barra made that a concrete statement of fact during MWC just two weeks ago.

“We have no plans to take that [the Mi app store] outside of China, because we are working with Google in every other market ... We are a GMS [Google Mobile Services] partner. We have been from the very first day that we sold our first device outside of China.”

That really does settle it.

So why is Xiaomi taking on this don't-call-it-a-partnership? Your guess is as good as mine - it could just be for the press, Microsoft could be compensating them, or they may have done it just because they felt their more enthusiastic users would want something new and exciting to do - which is apparently what they're telling people. It could be that innocuous.

The takeaway? Xiaomi is a Google partner, they have no reason to subvert Google when Google will be absolutely critical to their products' success outside China, and Xiaomi itself is making a point of de-emphasizing the importance of this Windows experiment.

Microsoft, meanwhile, was looking for 'Android under fire' headlines today, and they certainly got them.

Inbox By Gmail Now Rolling Out To Some Google Apps Domains