The newest Humble Bundle is live, and it's a big one. The mobile bundle is always a good source of cheap games, but this is the main deal—the Humble PC and Android Bundle 12. It currently includes seven games, all of which have PC and Android versions. Three of them are debuting on Android as part of the bundle as well. 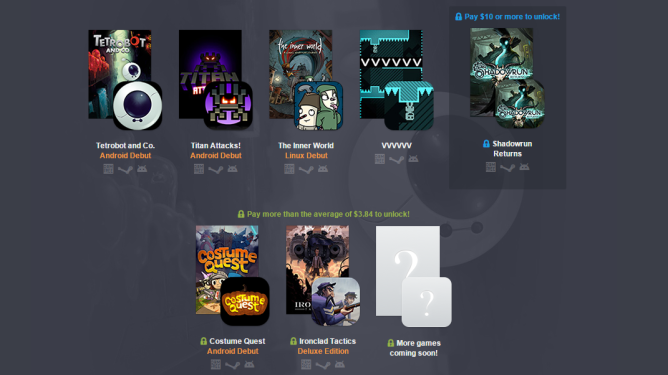 The bundle comes in three tiers. You can pay anything and get access to Tetrobot and Co (debut), Titan Attacks (debut), Inner World, and VVVVVV. If you pay more than the average (currently a little less than $4), you can add Costume Quest (debut) and Ironclad Tactics. Costume Quest is a Double Fine game, meaning it's probably great. The final tier is only available if you pay $10 or more and unlocks Shadowrun Returns.

More games will be added in one week, but you can buy now and still have access to the new games when they become available. A share of this bundle goes to supporting the EFF and American Red Cross, so don't be stingy.

Customers In Turkey Can Now Use PayPal To Buy Apps, Games, And Books From Google Play