Google is making two changes to the Play Store today, although one of these changes technically happened a few weeks ago and you didn't notice. Apps will soon carry content ratings so parents can make more informed decisions about what their kids have access to. Google also announced a manual review process for apps. Don't panic! Google has been doing this for weeks and no one has complained. 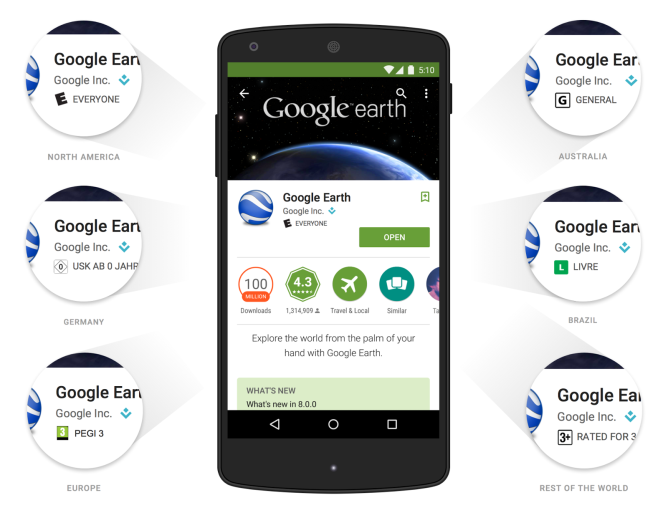 The rating systems will be based on regional standards. So in North America it's the ESRB system, in Europe it's PEGI, and so on. A generic age scale will be used for countries that don't have an established software rating system. Developers will need to log into the dev console to complete a quick survey about app content to get a rating assigned. These ratings will start showing up in the next few weeks.

Google's blog post includes a second announcement that sounds crazy on the face of it—Google now has human beings who manually review apps before they go live. Is the sky falling? Not yet, but apparently Google has been doing this for several weeks already. It's not a fully manual process, relying instead on automated tools to filter out things that might need that human touch. Google says it remains committed to getting apps published in hours rather than days or weeks like that other platform.

Surprisingly, Google started using this app approval process several weeks ago and no one noticed. That must mean it's working pretty well. This could help spot issues before an app goes live that would have previously led to its removal from the Play Store after users had already downloaded it. That's always a fiasco, so anything to provide more clarity is a good thing. There will also be more detail in the dev console about an app's status and the reason that it was rejected or removed, should it come to that.

Samsung Quietly Announces The Mid-Range Galaxy Tab A With Metal Design And A 4:3 Screen