Facebook has introduced a new way for friends to swap cash with one another that doesn't involve meeting in person, writing a check, or even opening up another app. With the new payments feature, they can send and receive money directly inside of Messenger. And it won't cost them a thing.

It's no secret Facebook wants users spending as much time on the social network as possible, and this new feature falls right in line with that strategy. Every time you step out of Messenger to open another app—say Google Wallet, PayPal, or Venmo —you stand the risk of getting distracted and doing something else rather than continuing to interact with a Facebook product. This helps alleviate that risk.

Payments arrived to Messenger several months after Snapchat unveiled Snapcash, a similar way for hip people to exchange money without firing up a financial app. Only in that case, Snapchat relies on Square in the backend. Facebook isn't counting on anyone but itself.

The feature is starting to roll out now in the US, and it will continue to over the coming months.

Once the feature is enabled on your account, you will see a $ alongside the options to send a photo or enter a message using speech. 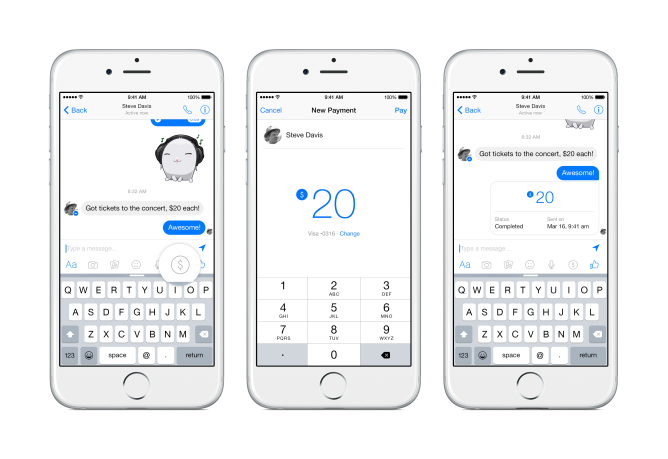 As for actually sending money, here are the instructions straight from Facebook. Note that the feature only supports debit cards, as credit cards would introduce fees to the experience that Facebook doesn't want to deal with.

After you add a card, Messenger will prompt you to create a PIN. This way friends can't pick up your phone and send themselves money while they're changing your status and swapping your profile picture out for something phallic. Well, not as easily, anyway. When it comes to Facebook, there's no accounting for the human element.