Do you need an accessory to show off your Android pride... you know, besides your Cruzerlite Nexus phone case, Bugdroid-eating-Apple vinyl sticker on the back of your car, hundreds of pins from the Big Android BBQ all over your messenger bag, and a Chromebook Pixel signed by Matias Duarte? Then Newegg's Woot-style flash deals site is happy to oblige. The online store is offering the GOgroove Pal Bot Android-shaped speaker for just thirteen bucks today and tomorrow. 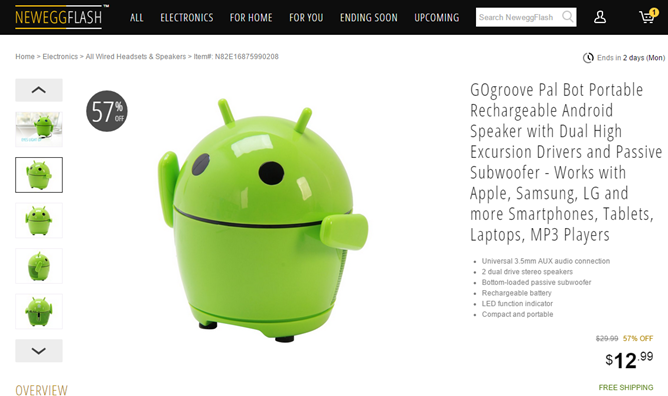 The Pal Bot is a wired speaker, not a Bluetooth speaker, which is probably why it's usually sold for only $30. It features a compact stereo speaker setup with a passive subwoofer crammed into its 4.8" tall body. An integrated headphone cable means it's ready to connect to just about anything, and the internal battery is recharged via the included MicroUSB cable. As a final touch the eyes light up with a blue LED, flashing purple to let you know the Pal Bot needs a recharge. 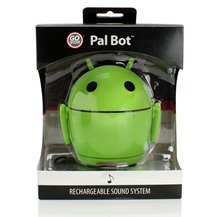 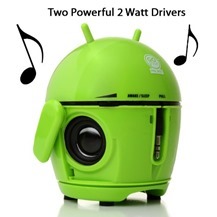 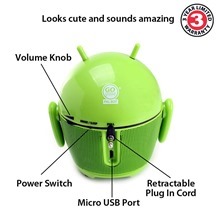 This thing isn't going to replace a high-fidelity speaker or a solid set of headphones, but it should give enough of a sound boost to make your phone or tablet an acceptable music companion in a hotel room or a guest bedroom. And look at it! The little guy even has tiny little moveable arms! The GOgroove Pal Bot will be on sale until the end of Monday, with Newegg's free super-saver shipping option available to all US residents. If you miss this sale, Amazon is currently offering the green version for just a few dollars more.

[Weekend Poll] Have The Loss Of A Removable Battery And SD Card Made The Galaxy S6 Worse Or Better?