The Internet is in the midst of having a mini hemorrhage over something that, basically, doesn't matter. Shocking, right? It appears that a few people on XDA have noticed that their Nexus 6 had a couple of Verizon-specific APKs installed on the system partition after updating to Android 5.1. There are two issues at play here: 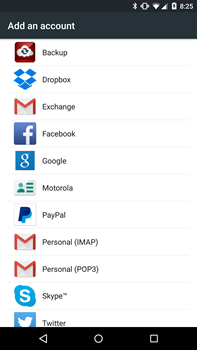 Firstly, let's explain what these apps actually do. VZWAPN is an app that almost any Android device has if it supports Verizon. As its name suggests, it provides access point names and other related data services for devices running on Verizon's network. As for Verizon Backup Assistant, that's an app that dates back a long time. The Galaxy Nexus had that preinstalled as well. That app is used to help people transfer contacts from "dumb phones" in case they get one of these new fangled smartphones. It's entirely possible that this app requires some type of system-level permission, which would require it to be on the system block in order to function fully.

At this point, it's worth noting that the VZW Backup account shouldn't be available from that Accounts screen in Settings unless the device actually has a Verizon SIM card in it, because it doesn't work otherwise. Attempting to add a VZ backup account will just give you a blank white screen. It's reasonable to expect that to be rectified in a future OTA update.

Now let's look at what's getting people up in arms. The apps exist somewhere on the device. It's as simple as that. With that said, allow me to provide some perspective.

Let's not pretend this is unique to Verizon. Sprint has the proprietary SprintDM app installed on the system partition as well. It has to be there in order to allow PRL and device profile updates on that carrier. Further, though not in APK form, you will find plenty of carrier-specific code in AOSP, dealing with everything from tethering to APNs to signal indicators.

As is so often the case with the Internet, the truth and big picture are not allowed to get in the way of a good story. People want to know why they can see anything at all related to any carrier on their pure and pristine Nexus 6, especially if they live outside the US. The answer is simple.

With the Nexus 6, we have been given a phone that works with almost any network you can name, anywhere in the world. That doesn't all happen by magic. There is a lot of work that has to go into it, and we should be commending Google and Motorola for making it happen. The only way to satisfy the Nexus hardcores would be for Google to maintain a bunch of different firmware variants (at the very least, one for every US carrier, one for the non-carrier purchased devices, and one for everywhere outside the US) that all contain different APKs and different code. That would obviously be a logistical nightmare with absolutely no upside for anyone but the most die-hard of Nexus fans.

The easiest solution for this problem is for Google to hide the Backup account option unless the device has a Verizon SIM, and otherwise, let the chips fall where they may. This entire subject is a complete non-issue that amounts to nothing but a tempest in a teapot.