We've heard a number of rumors about Google launching its own Mobile Virtual Network Operator (MVNO), codenamed Nova. According to reports, the service will source wireless service from Sprint and T-Mobile, but it will rely on Wi-Fi networks to bear most of the weight of both data and voice services (though VoIP). While the details of this plan still aren't clear, another piece of the puzzle just emerged that indicates Google is going to offer its own virtual private network (VPN) service, and it may be targeted specifically at Nova subscribers.

This information resulted from a tip we received a few days ago, pointing us in the direction of a new application called Google Connectivity Services. The app appears in the Android 5.1 firmware update that began rolling out to Nexus devices earlier this week. There is no launcher icon in the app drawer, but it's possible to launch it by issuing an ADB command or using a shortcut created by some 3rd-party applications. Once the app has been started up, it produces a simple dialog titled "Google VPN" with a very basic description of what a virtual private network does. Tapping through the dialog will present a standard VPN confirmation dialog. 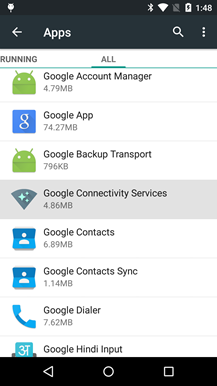 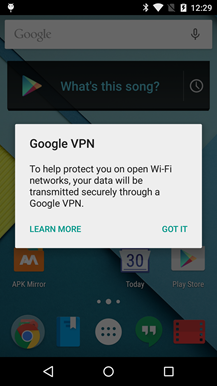 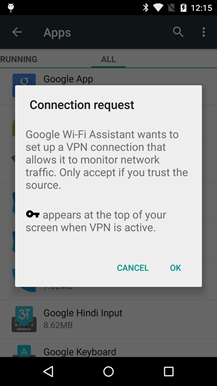 It's possible to open these dialogs on any Nexus device with Android 5.1 by launching the WifiAssistantOptInActivity activity. This can be done with an application like Nova launcher, or any other application that can create shortcuts to activities. Alternatively, if there's a computer set up with adb, connect the device through a USB cable and run this command from a terminal:

The primary function of a VPN is to encrypt the traffic traveling between a personal device like a laptop or smartphone, and a trusted service on the Internet. This allows regular people to connect to unsecured wireless networks like those in hotels and coffee shops without having to fear that there are other people snooping on their activities.

Google would want to be proactive about protecting customers from tampering.

This isn't the first time rumors have suggested Google is creating its own VPN service, it has been reported as early as 2005 – there was even an application, at one time. Countless people around the world already pay for similar services, and Google would certainly be a compelling competitor in either a free or paid form. Of course, if Nova subscribers are intended to make extensive use of public Wi-Fi networks, Google would want to be proactive about protecting its customers from tampering.

While there's very little on the surface of this application beyond a couple of popups, and nothing visibly connects it to the rumored Nova service, a deeper look into the Google Connectivity Services apk –teardown style– does reveals significant details. The evidence can be found in the application code, where the name 'nova' appears multiple times. In fact, these folders represent about 15% of the total code that doesn't come as part of the support libraries and Google Play services. 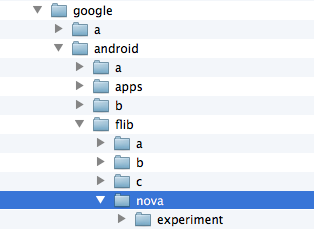 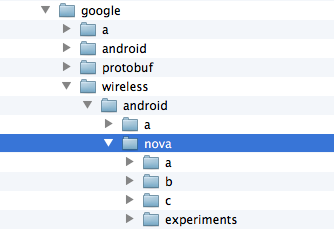 Not only is this the first physical evidence that there is a project codenamed Nova, but it directly connects it to a VPN service by Google. However, like most evidence gathered from a teardown, this only gives us a part of the picture. The code present in this application is primarily for implementing protocols and communicating with remote services, but it's indisputably meant to talk to Nova. Unfortunately, there's nothing to indicate plan structures, pricing, or any of the other aspects on the business side. It's also impossible to tell if Google's VPN service is exclusively limited to Nova subscribers, or if it will be available to users on other services.

While proof of the impending Nova project and a VPN are certainly big, there are a few other details from the apk that point to how it will be used to improve user experiences. To begin with, it looks like one of the functions of the Google Connectivity Services app is to allow users to provide feedback about public Wi-Fi networks. It looks like there will be a simple reporting dialog that allows users to provide descriptions about quality of a connection.

While one end of the equation allows for users to report high and low quality networks, the other side is to make use of that data. It appears that Google may have created a "Wi-Fi Assistant" that attempts to direct users only to networks that have been "determined to be high quality." In conjunction with the new Android 5.1 feature that switches away from networks without Internet connectivity, this should go a long way towards creating a seamless transition between access points as users move around.

It's worth pointing out, there's no reason yet to assume that the Google Connectivity Service app only exists for Nova. It may lead to easier connectivity for all smartphones, tablets, and possibly even watches. The VPN service, however, seems like an incredibly marketable feature for a Google-managed MVNO.

It's important to note that the Connectivity Service app isn't a part of AOSP, nor is it appearing on the Play Store (yet). It's exclusively on Nexus devices. It's likely that Google is preparing to test on a wider scale, or possibly even setting up for an announcement. There are plenty of details left to be revealed when Nova is finally made public, but it's starting to look like Google's vision for its cellular service will include users leaping from one public access point to another, ambivalent to the threat that public Wi-Fi once entailed.

The Original Moto X Is Finally Getting Its Lollipop Soak Test