Snagging a Nexus 5 from the Play Store hasn't been the easiest thing since the Nexus 6's launch, with the affordable handset fluctuating in and out of stock. The red and white versions disappeared before the end of the year, while the black option soldiered on for people who consider the Nexus 6 too big, too expensive, or both.

Now the Nexus 5 is out of stock again, and this time Google is listing it as no longer available for sale. 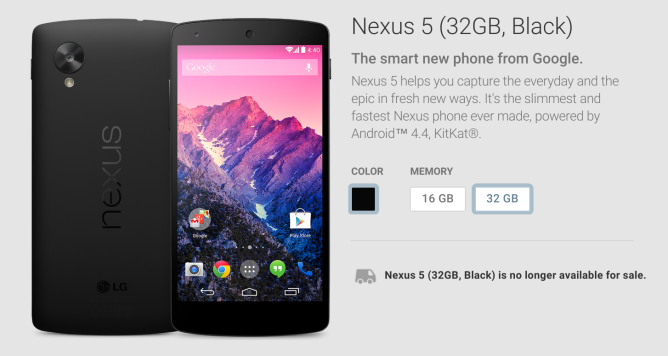 This message appears under both the 16GB and 32GB versions of the device.

The Nexus 5 is joined by the Chromebook Pixel, a premium $1,299 laptop that likely didn't ship in large numbers. Admittedly, it was a tough sell (but I sure love mine).

There's talk of an updated version of the Pixel coming down the pipeline soon, and we've spotted a listing for such a device on Google's support page.

Well that was quick. An updated Chromebook Pixel is now available in the spiffy new Google Store.

The Nexus 5, however, has disappeared entirely. Hopefully Google teases us with a smaller Nexus in the works for later this year, because the current version really is a lot of phone.

Google Launches The Google Store, A New Online Home For All Of Its Hardware Products