How much will Huawei's slick new Android Wear device cost? That seems to be the major decision factor for a lot of Android Police readers, impressive looks and features aside. When Huawei announced its round Wear watch at MWC, it unaccountably forgot to mention the price, only saying that it would be available in "more than 20 countries" whenever it launches. A week later we've got a slightly better idea of what it will cost, at least in Europe: somewhere around the €349 mark. 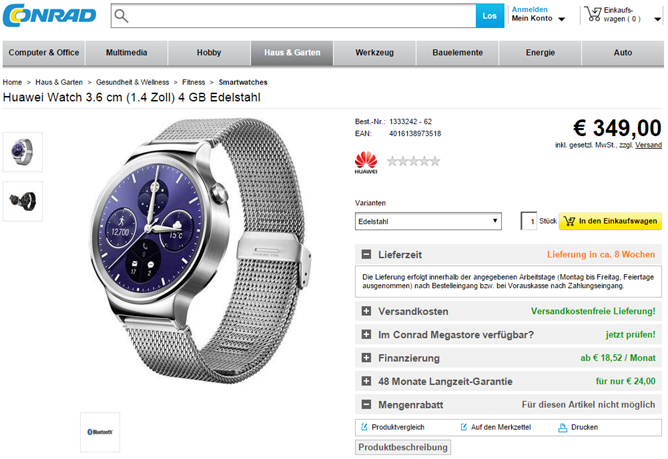 That's the price that Austrian retailer Conrad.at is listing the standard steel version of the watch at. Earlier the store listed the watch at €199, but like the somewhat absurd €1000 Amazon listings, that seems to have been a placeholder. German retailer Digitalo has a gold and leather version of the watch at €399, and so does the German version of Conrad. TechnoBuffalo quotes a UK retailer that claims the regular silver or black Huawei Watch will cost £300, while the gold model will be £350.

The Huawei Watch has been announced for the US market with no release date or price. For reference, €349 is about $367, and £300 is about $450. Considering the high markup that electronics get in Europe compared with the US (sorry, European readers), that would give the Huawei Watch an American price of somewhere in the $300-400 range, with $350 being a safe bet. That would make it a little more expensive than the G Watch R, which seems about right given its slightly larger, higher-res screen, sapphire glass, and metal build. We'll have to wait for confirmation from Huawei or a local retailer for more concrete pricing info.