Okay, we always get a little excited when a new app from Google Inc. appears in the Play Store. Tonight, Google's pushed an app called Interactive Events up, but we're not quite sure what it's for yet. According to Google:

But it's not exactly clear to us what managed events the app is meant to handle.

Since this post went up, Google has released an update to the Interactive Events app (removing the dogfood warning mentioned below), and revised the description to add a bit more clarity. Here's what it says now:

The Google Events App will allow guests, attending events run by Google, to interact with speakers on stage, take notes, participate in Q&A, connect to social media, and request further follow up information. The app is not available at events not organised by Google.

So, it looks like the app will be just for Google events. As Florian Kiersch points out on Google+, there's also a web version of the app which looks similarly unfinished (featuring both a FAB and a raised button for the same action).

Whether all this means it will replace the I/O app is anyone's guess, but personally I don't expect Google to drop the habit of making awesome I/O apps and releasing their source after the event.

Google has reached out to let us know that the Interactive Events app is not related to Google I/O 2015. The app for IO15 is expected sometime in April.

Knowing this, it seems clear that the app is just meant for Google-led events other than I/O, though what those events are - internal or otherwise - remains to be seen.

Interactive Events asks users to either type or scan an event code (the latter using an external barcode scanner app). Once that's done, users presumably continue to the actual interface, which looks like an unfinished mashup of previous years' Google I/O apps. 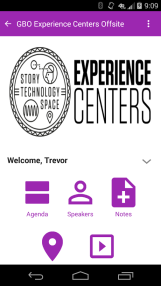 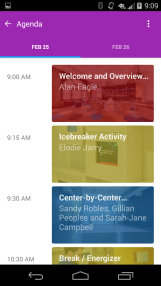 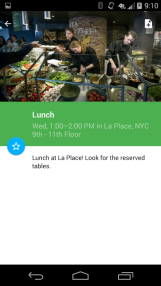 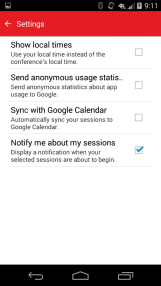 Oddly, when the app first launches users are greeted with Google's "internal dogfood" dialog, advising against discussing the app with non-Googlers. So it's possible that Interactive Events isn't quite done yet. This would make sense given the numerous design quirks and holo-era elements present in the interface. Of course it's also possible that the dialog was just left in the 1.0.0 release by mistake.

Shhh! This is a CONFIDENTIAL internal dogfood version of the Interactive Events app. Do not show this to non-Googlers and do not discuss this externally.

Whatever the case, you can check out the app for yourself through the widget below, or grab the APK directly from APK Mirror.