Listen, I'm against #brandbaiting as much as the next curmudgeonly person who writes words on the internet, but sometimes, companies do things so remarkably dumb that it's fun to watch other companies (generally equally devoid of any real moral compass) then proceed to tell them that they are, in fact, doing something really dumb. It's sort of like watching reality TV: no one actually likes any of the characters as human beings, but it's good fun to watch them drive one another insane.

Anyway, as you're likely aware, Apple did a smartwatch, and one version of said smartwatch - that is, of course, gold - starts at an eye-watering $10,000, and goes all the way up to $17,000. So, if you have $17,000 to spend, you too can wear the same thing Jony Ive probably does as he is chauffeured to Apple HQ in his admittedly very classy Bentley Mulsanne that I very much want.

ASUS, though, has decided to visualize the absurdity of the $10,000+ Apple Watch in an infrographic, in flow chart form, as #brands are wont to do. Well, seeing that we don't exactly want to come off as ASUS fanboys or anything, I decided to #debrand ASUS's admittedly charming image, to maintain our journalistic integrity, or something. Also, I am a total hack at Photoshop. 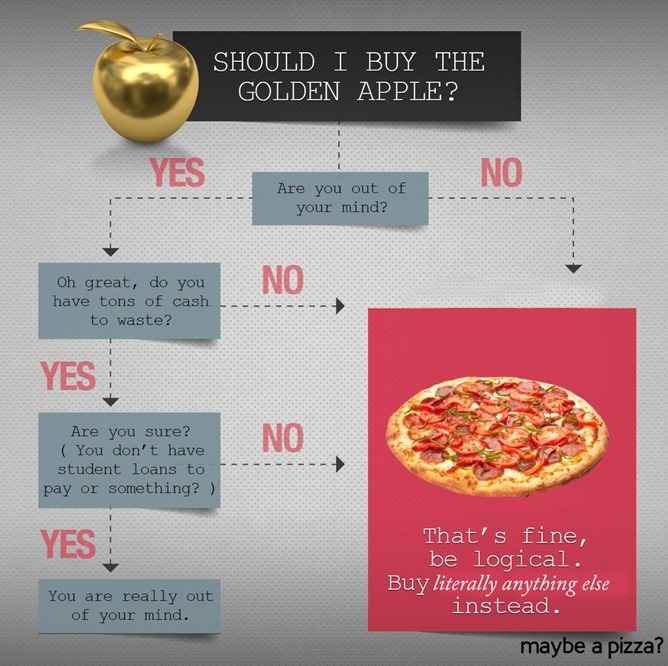 If you want to see the original, it's here. (Trust me, you're not missing that much.)

But yeah, the $17,000 Apple Watch Edition is a complete and utter joke. I certainly can't tell anyone how to spend their money, but I can think less than flattering things about them. And spending $17,000 on a smartwatch (or, hey, even $10,000) will get you lots of unflattering thoughts.

Also, anyone for pizza?