This article is part of our Android Police Files series.

Now that the hustle and bustle of Mobile World Congress 2015 is behind us, we have time to address some of the comments and emails we've received over the past several months.

If this is your first time coming across the Android Police Files, here's what you should know: some of the people who reach out to us assume that there's a police force out there dedicated entirely to Android (whatever that means) or that we personally had a hand in every piece of code or software that comes out for their devices. Others are just plain paranoid.

Here, see for yourself.

This entry is not a letter, but a five-month-old comment (posted after our last edition of the Android Police Files) left on what is now a ten-month-old post titled "[APK Teardown] Google Play Services 4.4 Explodes With Android Wear Support, Firmware Installer, And Much More." It reads:

I dont really undrstand this stuff but in my personal opinion...as far as permussions go....well I think its all bs cuz they can get into n e thing on n e phone if they really wanted to. (They is the govt/feds or n e 1 who is a good enough hackr to get in) but my guess is u gotta b some1 they r really watchin or maybe jst cuz theyr bored) but thats a good thing if u r a real bad person like a killer or child molester so that I like cuz that way they will get that bad person off the streets n out of society, tho it might b a privacy issue but Im sure there r ways to get around that all together if need b)
They can also count on the phones service providers which is good too if they need evidence against those who r bad ppl...esp if they know one or more is guilty but cant prove it...so yaaah! service provider records!
But I was just here cuz I saw on my phone "service wearableservice us in use" n I wanted to kno what it meant.
I still dont kno...cant seem to find answer.
Oh well.
Well, tc all. God bless.

A few minutes later, they followed up with:

Cuz thats exactly what it is.
Its a window.

When u think of a window u think yr car window...house window.

But this is also called Windows.

Its called that for a reason.

Juuuuust smthn to ponder on.

(See what I mean? Now excuse me as I get into character.)

It's okay, I don't understand most of what Cody says either. I'm just glad you alerted me to the many open windows on my non-Windows device through which the Feds are watching me go potty. I have pondered it and decided that maybe Google Play Services 4.4 wasn't worth downloading after all.

I must tell you folks as a player who does not pay for upgrades on tanks it is really hard to enjoy the game when you force a weaker player to go up against a hard level player. You need to be able to separate tanks that can kill in one shot vs a tank that takes 8-10 shots to kill the other . I am almost ready to quit your game and post a negative review on line about this great unequal play.

We don't make games. We do, however, write negative reviews online. You've come to the right place.

Subject: My GODs name being disrespected

On 11/25/14 I read by Z Launcher 1.0.0-Beta 9 comments-7 days ago
Cooldude5500-"not available in your country". Its a ___damn launcher etc
My question to you is Why was this person permitted to take my GODs name in vain and yall permit it to be put out on the internet .how can you be so disrespectful first to my GOD and. to all of us that love him.. you certainly would not have permitted it if it had been a different religion would you. Shame to all of yall please don't let this happen again

We don't tolerate hate speech and clamp down on it regardless of who's the target, whether that's Christians (which some members of our staff are) or non-Christians (the rest of us).

This comment, however, just isn't worth any of us getting so ___damn worked up over.

Here we present a couple of emails sent to our founder. 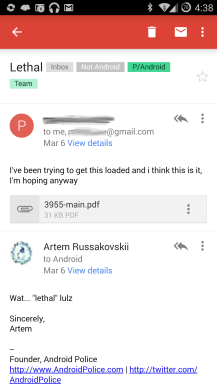 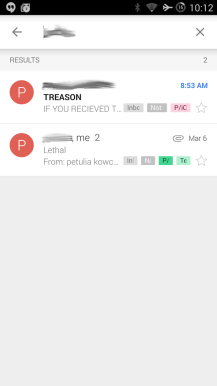 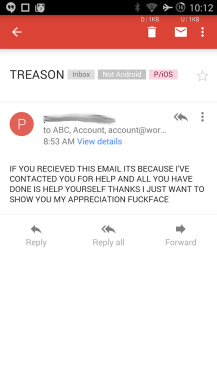 By not opening this sketch email attachment, Artem has apparently committed an act of treason. If AP shuts down in a couple of months, now we know why.

While on the subject of Artem's inbox, here's another pair from someone none of us have ever heard of.

You don't join the Play Store. It sucks you in with free credit, movies, and music. Then you never want to leave.

why are you interfering with my networks and watching over stuff on my laptop and phone. i didnt do anything wrong and every computer tech i know says they have never herd of you and you have no rights to be interfering with my stuff and watching what i do. my friend in the NSA said if it keeps happening he can shut you down for installing all the viruses and spyware on my shit. e-mail ME Back so i know whats going on., cause if it isnt you, than whoever it is, is linking the address back to you.

We're not the ones watching over your computer. I think your "friend" at the "NSA" might be lying to you. 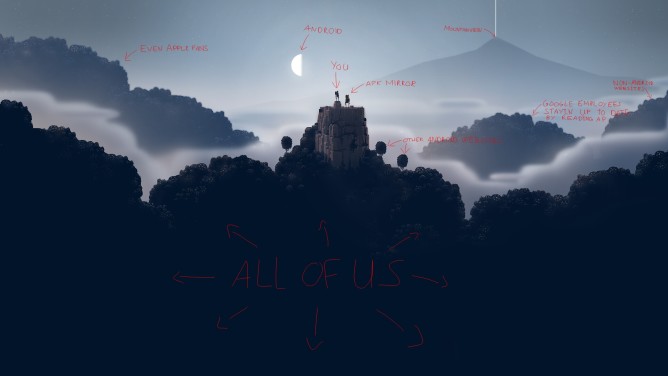 None of us really know what's going on here, so we're leaving this one entirely to you. Chime in below!

Despite what you've just seen, we really do love receiving your feedback, so don't hesitate to give it to us. You can find out how to reach us via email over on our contact page. If you prefer social media, you can hit us up on Google+, Twitter, and Facebook.

It takes a while to recover from this much wat, so until our next installment, feel free to browse through our previous entries, and keep it tuned right here for all things Android.