Discovering apps on the Play Store is a daunting task. Unless you are passionate about Android and spend hours going down the rabbit hole of Search / Similar / More from developer, or religiously reading sites like Android Police, you will miss out on a lot of great releases. That's the problem Appeer wants to solve. 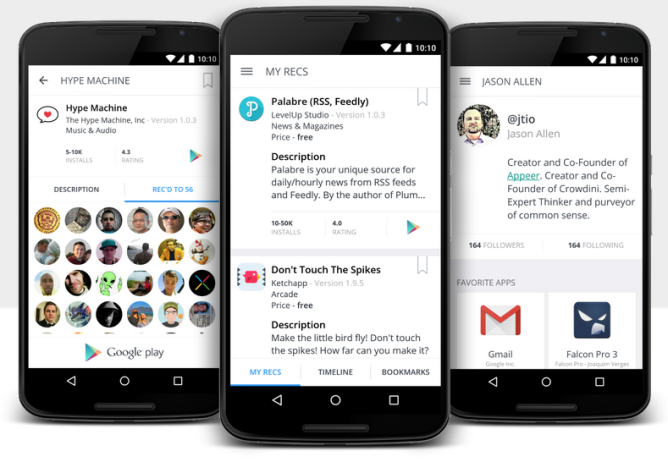 Appeer takes a MagicRecs-like approach to app recommendation. The idea boils down to this: Appeer monitors your friends' devices for the apps they install and if 3 or more of them have a new app, it gets recommended to you. In a way, it's crowd-sourced app discovery, relying on the power of your social network to do the heavy lifting for you.

Many other app recommendation services have tried this social approach before, but Appeer differentiates itself from the lot with a few features. First, based on the apps you have installed, its algorithm will auto-follow a few users for you so you don't have to spend your time finding interesting people. Second, it works asynchronously like Twitter, not requiring both parties to be "friends" to allow any of them to get the other's recommendations. And third, although it monitors your device for your apps, it doesn't show that list publicly but just uses it for its behind the scenes engine. Only apps you favorite are displayed on your profile.

Given the limited number of users so far, I only saw a few recommendations and they weren't all that appealing. But I suspect that the more people sign in (through a Google+ login by the way), the more apps there will be to discover through Appeer. Thankfully, the Timeline tab adds more suggestions by displaying apps that were recommended not necessarily to you, but to the people you follow. Appeer uses a card-based approach in design, highlighting the app's essential information (price, rating, installs, category...) and expanding into a full description when tapped. It's possible to bookmark apps if you don't want to get them right away, thumbs up or down those you already have installed, favorite a few of your apps to appear in your public profile, and export your app list in various formats.

There are still a few missing features in Appeer, like searching for a specific username to follow, using Google+ (or Twitter or Facebook) to find your friends, and blacklisting apps you don't want to be used in your recommendation algorithm. The app is free to try and use and doesn't require a lot of involvement on your part (it can work in the background and only notify you when a really cool recommendation is available). The only holdback is that you can't seem to be able to remove auto-followed users yet — it is a premium feature that we were told should cost about $2 per year. You can check the full press release and download the app below. If you do so, you can find me as @rita.

March 6, 2015 — Austin-based Appeer announces the launch of its app recommendation platform, aims to provide a personalized app discovery experience for its users.

Available March 6, 2015 for free via Google Play for Android devices, Appeer will give users an unprecedented insight into the world of apps based on their own app inventory and the personal network of people they follow.

Designed as a sleek app recommendation engine that is both user-friendly and powerful, Appeer app looks beyond paid app ads, review sites, and “popular app” sections of app stores to pair its users with the perfect app or game.

Utilizing an algorithm that automatically follows people on behalf of a user in order to build a tailor-made list of app recommendations, the Appeer improves on the current app discovery process.

“Within 30 seconds of opening the app for the first time Appeer offers dozens of personally tailored recommendations that will update regularly,” says Appeer Co-Founder and CEO Jason Allen. “This app bypasses so many of the issues that consumers have when trying to discover the next great app,” he adds.

The app’s suite of features include push notifications that allow users to install a recommended app directly from Google Play, a viewable timeline of recommendations, and the ability to export the user's app inventory to four different formats.

“Additionally, users will be able to bookmark recommended apps so they can check them out later, even if the recommendation comes to them through a push notification,” says Appeer Technical Co-Founder Komra Beth Salo. “If they really like an app, users can share the recommendation via Appeer to their contacts or friends on social networks,” she adds.

“Our competitors are being paid to recommend apps to their users. Appeer only gives organic recommendations because our focus is on providing the best recommendations for our users,” explains CEO Jason Allen.

As the adoption of smartphones continues to rise on a global scale, so does the overall time we spend using apps or playing games. According to Nielsen, users spent an average of 30 hours, 15 minutes on their apps in Q4 2013, a full half-day more than the 18 hours, 18 minutes spent in Q4 2011. However, these figures are not mirrored by the average number of apps used, which only increased from 23.2 in 2011 to 26.8 apps per month in 2013.

With thousands of new apps being developed everyday — a large number of which are available for free — it is hard to look beyond these numbers without seeing a real need for a powerful and dynamic app discovery tool like Appeer.

Aiming to change the way we discover new apps, Appeer moves beyond the “Top App” charts highlighted by the App Store and Google Play, and places the focus back on the individual user.

Founded in 2014 by Jason Allen, Komra Beth Salo and Milan Cubic, Austin-based Appeer is a new Android app, which aims to change how users discover great new Apps and Games. The Appeer app creates personally tailored app and game recommendations based on a user’s profile. Recommendations can be viewed in the app or received by the user via notifications on their device.