Sony's recent Xperia phones and tablets have included themable skins for the proprietary Sony UI that runs on top of Android. Now Sony wants you (yes, you!) to make themes for its devices using a custom Java desktop program. The company has released a beta version of the application for aspiring theme makers, available from the Sony Developer site.

The program allows you to apply different colors and graphical elements to the various bits and pieces of Sony's themes. It's basically a streamlined setup process - anyone who's made themes for the CyanogenMod engine or a custom Android launcher will feel pretty comfortable. That said, Sony claims that it has over 300 adjustable components for users to fiddle with, which is considerably more than even the most complex CyanogenMod themes I've seen on the Play Store. Everything from wallpapers to navigation bar icons to folder text color is adjustable, and Sony includes Photoshop templates for advanced users who want to start from scratch. 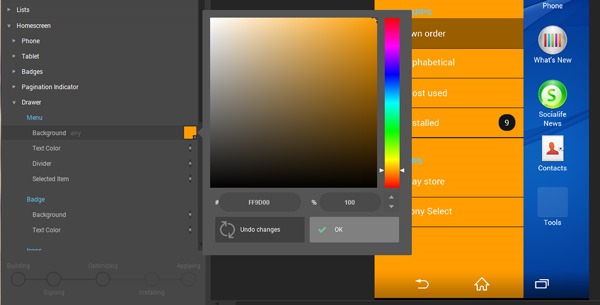 Sony suggests some basic image editing skills and knowledge of how Android handles stretchable images before beginning. Themes created in the Theme Engine can be exported as unsigned APK files, manually signed, then applied to any compatible Xperia-branded device or submitted to Sony's repository. It should be fairly easy for almost anyone with basic skills to customize a theme, and even prepare it for distribution on the Play Store. Finally, my personalized Red Panda Adventures device is within reach!

Google Will Not Require OEMs To Encrypt New Devices With Lollipop After All, But Does 'Very ...