Remember when HTC announced a partnership with Under Armour for an Android application and future products? Well, this marriage has carried its first fruit, the HTC Grip. Or maybe it's called the HTC re grip. I don't know, because HTC's branding for this accessory is all over the place. 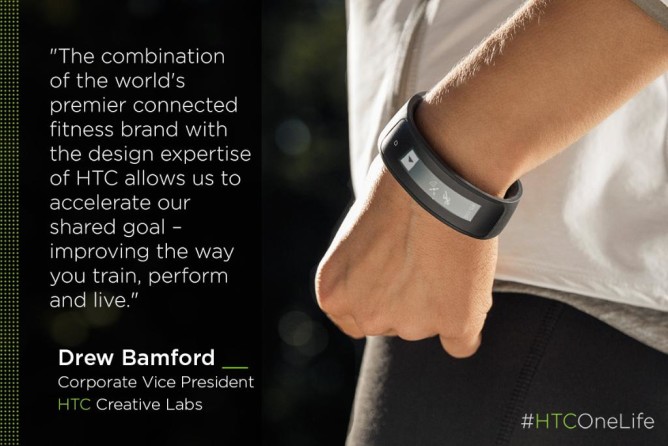 The Grip / re grip, which is a fitness tracker band, a la Nike Fuelband, Fitbit Charge, et al. differentiates itself by carrying a built-in GPS. While it isn't the first band to do so (the Microsoft Band already has GPS), it will use it to communicate directly with the Under Armour Record application to track your outdoor activities.

The most interesting feature of the Grip / re grip is its multi-sport setup. Thanks to the included gyroscope and accelerometer, the Grip / re grip can track several activities, from running and walking to sit-ups, rope jumping, treadmill running, and more. The included PMOLED display will also mirror your phone's notifications like texts, emails, calls, calendar events, and music. You can control the latter from the band.

The Grip / re grip doesn't have a heart rate sensor, but it is IP57 water and dust resistant. Its battery life ranges from 5hrs with the GPS enabled to 2-3 days if it's disabled. It will launch later this year in the US and will retail for $199.

Alternate title: Peter Chou Told Everyone At HTC To Get A Grip, And So They Did