If there's ever been a persistent comment on Android Police in the last couple of years, it's that powerful smartphones are just too damn big these days. The Nexus 6 is gigantic, and 5.2"+ is quickly becoming standard smartphone size. Finding a good, inexpensive phone that isn't too large isn't impossible, but it's probably not as easy as it should be.

So, that's where Alcatel comes in. Yes, Alcatel has a reputation for making some of the slowest, cheapest, and least likeable prepaid phone fare here in the US, but in China and around the world, Alcatel does offer a pretty large portfolio of handsets. The problem is that in America, Alcatel hasn't generally sold unlocked smartphones, instead leveraging partnerships with carriers to sell the aforementioned prepaid swill that no one really likes, but has somehow catapulted the company into the number five spot for smartphone sales in the US. Now that Alcatel has cemented a position with the carriers, though, they're going to attack the rapidly growing US market for unlocked handsets (yes, unlocked phones really have been that unpopular here).

Meet OneTouch Idol 3 (try to get past the name) - a mid-range, affordable phone that's actually pretty nice. The Idol 3's biggest appeal aside from price is perhaps the proposition of "one phone, two sizes," as Alactel will offer the Idol 3 in both 4.7" and 5.5" forms. The one big difference aside from the display dimension is chipset, but don't worry, this isn't some lame MediaTek fare - the Idol 3 is equipped with either a Snapdragon 615 octacore or Snapdragon 410 quad-core processor, and both models will have LTE. The 4.7" version gets the less powerful 410, but that chip is no slouch. As for the 615, it's Qualcomm's most potent midrange offering on the market. Both chips use 64-bit A53 ARM CPU cores. 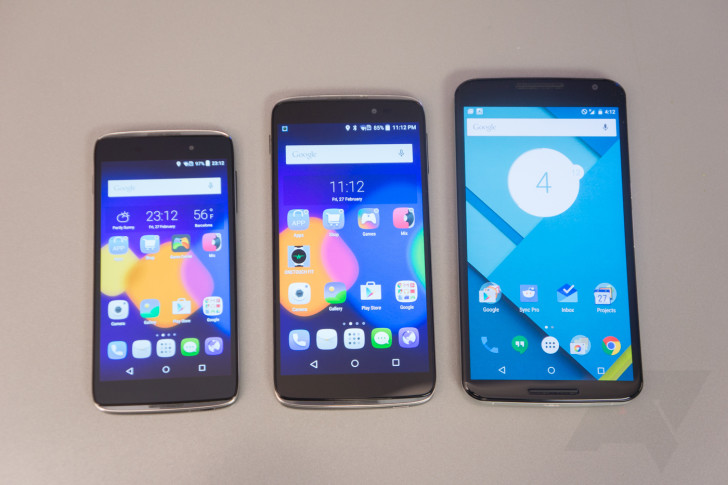 Both versions of the Idol 3 feel relatively quick and snappy, even on the prerelease firmware we were shown. Now, your question, of course, is what these phones will cost. Alcatel hasn't announced pricing, but $249 and $199 for the 5.5" and 4.7", respectively, seems like a very good bet to make based on the discussion we had with the company. They will be sold unlocked through a yet-to-be-launched online storefront, with shipping fulfillment provided by Amazon.

Dual front-facing speakers, 720p and 1080p IPS LCDs that actually look quite nice (really), Android 5.0.2, and LTE are standard on both versions of the Idol 3, and at those price points, it's not hard to see why Alcatel may raise some eyebrows here. While the phones won't launch until Q2, it's not like they're going to get lapped by everyone in the meantime, so these should be pretty competitive budget devices when they do hit the market. The preproduction devices we were shown did have a couple of issues - build quality was not exactly outstanding, though I think these phones in particular had been subject to a lot of testing and wear and tear before they reached our hands. Still, the loud speakers and very respectable displays belied their pricing, the latter's lacklusterness generally being a reliable marker for budget smartphones - not so here.

The software overlay is, essentially, a launcher. Toss on your own option and the Idol 3 basically acts and feels like any Lollipop device. Alcatel indicated that they intend to take a strong vanilla-Android approach in the future as well, because it has actually become something of a differentiator. The $600-800 flagships almost invariably come with significant skinning, so foregoing that customization is actually a potential customer draw, especially at such competitive pricing. Alcatel generally wants to commit to a 90-day upgrade cycle for its phones, but admits that this is going to vary based on the chipset in the device (read: Qualcomm).

Our review of the Idol 3 should be on the horizon in April. Full specs for the Idol 3, in both sizes, follow.